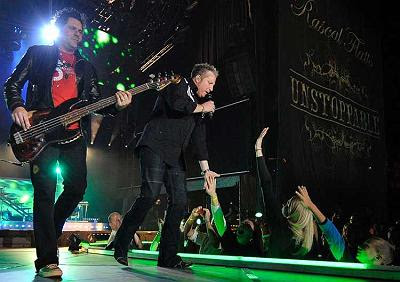 NASHVILLE – (July 20, 2009) – RASCAL FLATTS became the first country act to perform a concert in historic Wrigley Field in Chicago this past Saturday night. The group entertained before a sold-out crowd of 37,000 fans for one of only four concerts ever played in the Chicago Cubs home stadium. Vince Gill and Darius Rucker opened.

The four-hour energy packed show was filled with Rascal Flatts biggest hits, among them “My Wish,” “What Hurts The Most,” “Here Comes Goodbye,” “Bob The Head” and new smash single “Summer Nights.” More great music was showcased when Gill was brought on stage mid-way through Flatts set to perform “Whenever You Come Around” with Gary, Jay and Joe Don. Rucker performed with Flatts during their two finale tunes, Hootie & the Blowfish’s “Hold My Hand” and “Life Is A Highway,” which became an award-winning remake hit for Flatts.

The band will bring their “Rascal Flatts American Living Unstoppable Tour” to its second stadium show planned this summer to Crew Stadium in on August 9. The tour continues this weekend with shows in , and .

Rascal Flatts recently placed their fourth consecutive studio album atop the Top 200 chart with the release of Unstoppable with first week sales of 351,000 albums. It has became the biggest country release of 2009 to date, and the best in country first week sales since November 2008. Since they launched their career in 2000, they have sold 20 million albums, scored 11 #1 singles and 18 top 10 hits and are the reigning AMA, CMT, PCA, ACM and CMA Vocal Group of The Year.