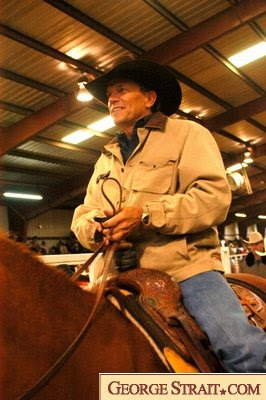 George Strait's "Living For The Night," the first single from his upcoming album TWANG, hit the Top 15 mark in just three weeks making it one of the fastest rising singles of his career. The song, written by Strait, his son Bubba Strait and legendary songwriter Dean Dillon sits at #15 this week on Billboard's Hot Country Songs chart and #13 on the Mediabase/Country Aircheck chart. With the debut single racing up the charts, the street date of TWANG has been moved up to August 11, 2009.

"It makes a papa proud to have my son contributing to the creation of this record," Strait admits. "We had a great time writing with each other and then Dean adding his magic made it even more special. I hope the people that buy this record have as much fun listening to it as I had making it."

"Living For The Night" marks the first time Strait has penned a song since "I Can't See Texas From Here" from his 1982 debut - Strait Country. Strait co-wrote two additional songs on TWANG - "He's Got That Something Special" and "Out Of Sight Out Of Mind." Bubba Strait also wrote the track "Arkansas Dave."

Co-producing this thirteen-track disc with legendary producer Tony Brown, Strait proves again why he has sold over 67 million albums throughout his record-breaking career. TWANG, Strait's 38th album, was recorded at Shrimpboat Sound Studio in Key West, FL. It is the same studio where they recorded Strait's last two award-winning albums.

2009 has already been a year of accolades for Strait. His platinum-selling Troubadour was named "Best Country Album" at the 51st Annual Grammy Awards in February. In April, Strait was the fifth artist ever to receive the Academy of Country Music's Artist of the Decade honor. Most recently, he headlined the kick-off event at the new Dallas Cowboys' stadium, selling out the venue is less than an hour. The concert was hailed by the Dallas Morning News as "an extravaganza" that "showcased Strait at the pinnacle of his musical game."

With a career spanning more than 25 years, Strait has 57 #1 singles to his credit, which is the record for more Number One hits than any artist in history including Elvis. His 33 different platinum or multi-platinum albums have earned him the most RIAA platinum certifications in country music and third in all genres behind The Beatles and Elvis Presley. Strait was inducted into the Country Music Hall of Fame in 2006, making him one of a few artists to receive such an honor while still actively recording and producing music.

2. Where Have I Been All My Life - Sherrie Austin, Will Nance and Steve Williams 3. I Gotta Get To You -Jim Lauderdale, Jimmy Ritchey and Blaine Larsen
4. Easy As You Go - Steve Bogard and Rick Giles
5. Living For The Night - George Strait, Bubba Strait and Dean Dillon
6. Same Kind Of Crazy - Delbert McClinton and Gary Nicholson
7. Out Of Sight Out Of Mind - George Strait and Bubba Strait
8. Arkansas Dave - Bubba Strait
9. The Breath You Take - Dean Dillon, Jessie Jo Dillon and Casey Beathard
10. He's Got That Something Special - George Strait, Bubba Strait and Dean Dillon
11. Hot Grease And Zydeco - Gordon Bradberry and Tony Ramey
12. Beautiful Day For Goodbye - Doug Johnson and Pat Bunch
13. El Rey - Jose Alfredo Jimenez