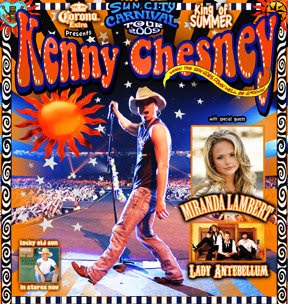 First..the Chesney show is always good....simple as that...NOW if you compare stadium show of one year to the next with guest stars you can make a comparison...IF you went to see Sugarland as much as Kenny THEN you can make a statement.... Sugarland has a lot of fans and they have been the deal breakers for some ticket buyers on this tour.... but as happens....Jennifer has done somethign to her voice again....Shes been on voice rest and cancelled a few..more than any of the headliners thats for sure.... here's a story from San Jose paper:

Folks arriving Saturday for the big country show at San Francisco’s AT&T Park were greeted with a sign saying Sugarland — No. 2 on the bill behind Kenny Chesney — would not be performing because singer Jennifer Nettles had lost her voice in the recording studio. (What?! Did she forget she had a gig on Saturday night?! Did she not know 40,000 people had bought tickets expecting to hear her sing? Couldn’t she have declined that seventh take?)

The sign offered refunds but also stated that Lady Antebellum, Miranda Lambert and Chesney would play longer sets to make up for the absence. In actuality? Not so much. Chesney just pulled out his standard 90-minute set, and the whole evening was over by 10:40. Though the set was thoroughly professional and technically accomplished, and packed with familiar singalong hits — generally about partying, rose-colored nostalgia, the beach, or some combination thereof — it certainly lacked the sense of an event that last summer’s installment had, when Chesney was joined onstage by Sammy Hagar and Steve Miller. There wasn’t much magic.