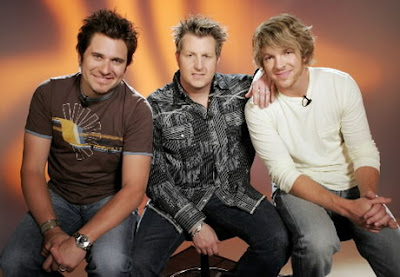 Nashville, TN…(July 15, 2009)…Not only is Rascal Flatts’ latest hit single “Summer Nights” climbing the country radio charts but the song can also be found on ESPN’s Major League Baseball coverage and in a new music video.

Rascal Flatts are known for delivering sweeping, emotional music videos, however the band takes a different approach with the concept for “Summer Nights” and do not appear within the music video itself. Instead, Gary, Jay and Joe Don can be seen in the intro and outro for the video. Directed by Shaun Silva and shot in , “Summer Nights” can be seen on TV and online starting July 20.

Rascal Flatts recently placed their fourth consecutive studio album atop the Top 200 chart with the release of Unstoppable with first week sales of 351,000 albums. It also became the biggest country release of 2009 and the best in country first week sales since November 2008. Since they launched their career in 2000, they have sold 20 million albums, scored 11 #1 singles and 18 top 10 hits and are the reigning AMA, CMT, PCA, ACM and CMA Vocal Group of The Year. The band has become well know for their touring savvy with energetic performances, high-tech production and in-concert interactive fan participation and recently launched "Rascal Flatts American Living Unstoppable Tour," which will hit 40 cities by the end of this year.