In the Garden with Barbara 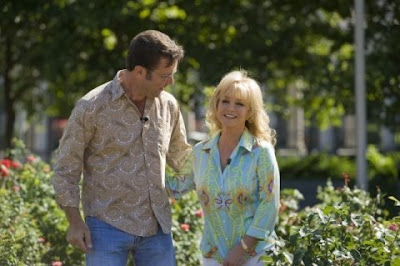 NASHVILLE, Tenn.-- July 27, 2009--On the heels of her induction to the Country Music Hall of Fame, Barbara Mandrell will make a television appearance to support her latest project, the Nashville Music Garden. Located at the corner of Fourth Avenue and Demonbreun (in the Hall of Fame Park just across the street from the Schermerhorn Symphony Center), the 2,700-square-foot public garden honors those that have made a positive impact on Nashville's entertainment industry. Tune in to "Volunteer Gardener" on Nashville Public Television (NPT-Channel 8) on Thursday, July 30 at 7:30 p.m. and watch both gardening and music create their own kind of harmony in this special episode featuring Mandrell and host Troy Marden. The show re-airs onSunday, August 2 at 9:30 a.m. "Volunteer Gardener" also airs across Tennessee on select PBS stations including Knoxville, Chattanooga, Memphis, Martin and Cookeville (check local listings for show times).

"I feel truly blessed to be part of the Nashville Music Garden. The garden will both add to the beautification of Music City as well honor Nashville's best!" explains Mandrell. An avid gardener herself, the Nashville Music Garden has been Mandrell's passion project for over three years. "It is so wonderful to see all of this hard work come into bloom," says Mandrell. The public is invited to attend the dedication for the garden on Tuesday, September 29 at 10:30 a.m. Mandrell will serve as host for what is sure to be a star-studded event. For more information, visit www.nashvillemusicgarden.com.

About Barbara Mandrell:
After retiring from an illustrious 38 year career over 10 years ago Barbara stepped off the stage and out of the spotlight. Among her many accolades, Barbara was inducted this year to the Country Music Hall of Fame. She is also the first artist to win the CMA Entertainer Of The Year for two consecutive years and has won multiple awards from the Country Music Association, Academy of Country Music, American Music Awards, The Grammy® Awards, People's Choice Awards as well as a Dove Award. Her variety show, "Barbara Mandrell and the Mandrell Sisters" on NBC drew millions of viewers weekly. Barbara has also starred in numerous television shows, including her farewell performance at Nashville's Opry House, a sell-out concert titled "Barbara Mandrell and the Do-Rites: The Last Dance."

About NPT:
Nashville Public Television is available free and over the air to nearly 2.2 million people throughout the Middle Tennessee and southern Kentucky viewing area, and is watched by more than 600,000 households every week. The mission of NPT is to provide, through the power of traditional television and interactive telecommunications, high quality educational, cultural and civic experiences that address issues and concerns of the people of the Nashville region, and which thereby help improve the lives of those they serve.