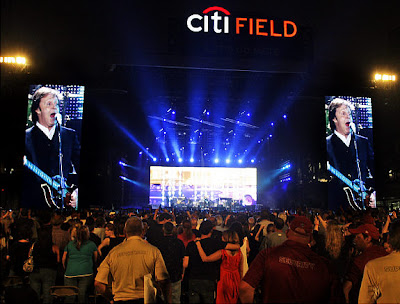 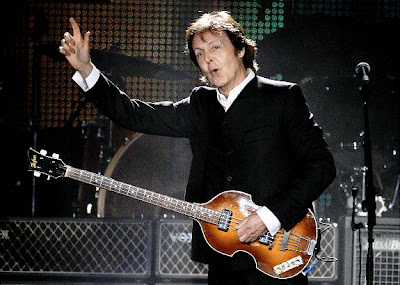 martinamcbrideWe didn't get 2 meet him, but that's ok. It was so special and emotional and moving and happy and free and wonderful. Magical night. All Friday night Martina tweeted away like a little school girl....This were her night! Citi Field in Queens....The Beatle was back..Billy Joel helped him at one point with I Saw Her Standing There..Paul says this is it for touring..we shall see...
here'e the NY Daily News review:

Of course, several key differences between 1965 and today made themselves immediately clear.

This time, everyone could hear. And the only "girls" who screamed were gently prompted by Paul.

As a further reference to history, Paul brought out a special guest at one point - Billy Joel, who last summer closed down the crumbling Shea.

Together they performed a song from the '65 performance, "I Saw Her Standing There."

Still, the focus at Friday night's event didn't rest solely in the past.

If ancient Beatles' songs ate up much of the set-list, the performance itself offered a present tense lesson in the enduring power of melody.

From the very first number - "Drive My Car" - McCartney demonstrated the unending value of well-honed tunes matched to beats that kick.

Sir Paul remains the premier tunesmith of the last half century, and when he performs those tunes with verve, as he did Friday night, their fluidity never ceases to excite.

Paul's voice - particularly his flighty falsetto - remained boyishly strong throughout, showing not a trace of his improbable 67 years.

The star also benefitted from a particularly fit backup band.

They mimicked the Fab Four's harmonies with care, while drummer Abe Laboriel Jr. put in particularly muscular work as a support.

Paul also took time out to honor the two late Beatles at the show.

He acknowledged John with an acoustic song he wrote some years back, "Here Today."

To salute George, he played "Something" with the quiet Beatle's favored ukulele.

Paul even made a good case for some of his lesser known solo material, including "Only Mama Knows," with its sweet harmonies and serrated guitars.

But, naturally, the Beatles' songs made the greatest impression, including "I'm Down," which he'd done in '65.

Of course, the music reads very differently today. What arose in '65 as the gateway to a new world now reads as an ode to warmth and comfort.

Thankfully, Friday night's show displayed why this music has provided so much comfort to so many, for so long.