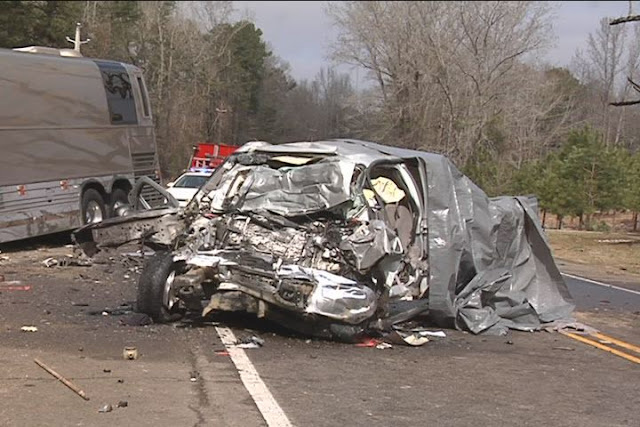 TRACE ADKINS BAND BUS INVOLVED IN FATAL CRASH
Nashville, TN - February 13, 2010... Earlier today in Caddo Parrish, Louisiana , a pickup truckcrossed the center line and crashed head-on into the tour bus carrying the band of country music singer Trace Adkins. Both men in the truck were killed upon impact. None of Adkins' band received serious injuries, however, five were taken by ambulance to a nearby hospital for treatment of minor injuries and observation.
Adkins, who was not on the bus, had already arrived at the venue when he heard the news. He went to the scene in a van where he picked up the uninjured band members, then went to the hospital to check on the others.
"This is a real tragedy," says Adkins. "Two people have been killed and I don't even know their names. So out of respect for their families, I prefer not to comment too much at this time."
Adkins, who is a native of Sarepta , Louisiana is still planning to perform a scaled-down acoustic set at tonight's show with Martina McBride at the CenturyTel Center in Bossier City, Louisiana. He will not perform at tomorrow night's concert (2/14)  in Pensacola, Florida , however  Martina McBride andSarah Buxton will go on as scheduled.