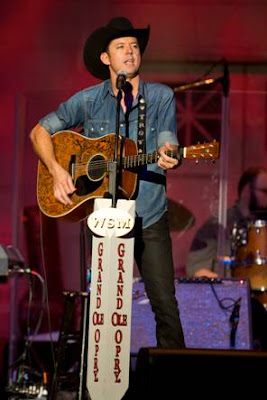 , TN – August 19, 2010 - EMI Records Nashville’s flagship artist Troy Olsen realized a longtime dream when he made his Grand Ole Opry debut Tuesday night, August 17. Olsen performed his current single “Summer Thing” as well as “Good Hands” and “Tumbleweed.” All three songs are included on his self-titled debut EP available at iTunes on October 5.
Olsen revealed to the crowd that even though he has listened to hundreds of Grand Ole Opry radio shows he has never even been to see it in person because he wanted his first time at the Opry to be when he was actually playing on the world famous Grand Ole Opry stage (once even making his own mother so mad because he refused to go with them when they were in Nashville to visit). He got that chance Tuesday night.
Olsen performing for the first time on the world famous Grand Ole Opry stage
Photo #2:  Olsen with Pete Fisher, VP/General Manager, Grand Ole Opry
Photo #3: Troy Olsen surrounded with part of his congratulatory “team” after he comes off the stage (l to r) Brad Bissell, CAA; Angela Lange, Sr VP Promotion, EMI Records Nashville; Troy Olsen; Trisha McClanahan, McClanahan Management; Dixie Owen, Sr. Director, Media & PR, EMI Records Nashville