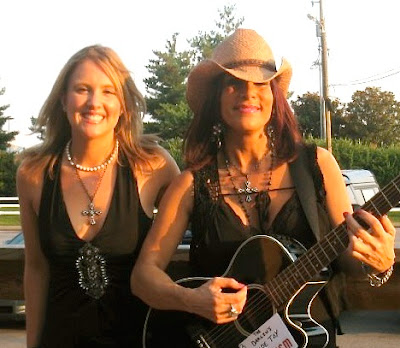 NASHVILLE, TENNESSEE (August 13, 2009) - Singer/songwriters Erinn Bates of Nashville and Jude Toy of Portland, Oregon are the country duo, The Darlin’s and were announced the winners of the WSM radio finals competition held at the Nashville Palace on August 12. They will open for country star, Darryl Worley, at the Wilson County Fair in Lebanon on August 24, 2009.

Erinn Bates is a Hillwood High School and Belmont University alum who had a label deal with Sony Nashville before the merge with BMG. She has recorded sides with The Judds producer, Brent Maher, and Lee Ann Womack producer, Mark Wright. She is also the singer of the Honest Abe Log Home jingle.

Portland native, Jude Toy, spent time in LA recording and performing as lead guitarist in the rock band, The Creamers and started the duo, The Darlin’s, in the late 90s. After moving to Nashville, the former lead singer left to pursue other ventures and Jude was left with finding another duo partner.

Bates and Toy met at the renowned cosmetic company, Sephora, in the Green Hills Mall in Nashville in 2006 and began collaborating in September of 2008. They have been writing their own songs and performing at venues such as The Listening Room, The Bluebird Café, and Mad Donna’s. They recently opened for country singer, Andy Griggs, at the Southside Festival in Southside, Alabama. They will be kicking off the Wilson County Fair festivities on August 21 with WSM 650 at the Cracker Barrel in Lebanon, Tennessee.

For more information on The Darlins, find them at www.myspace.com/thedarlinsmusic1