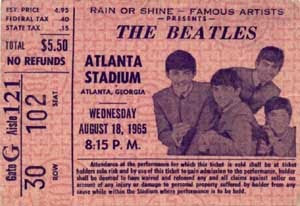 Paul McCartney playing Atlanta this weekend..the stage at Piedmont park is under construction....One August night many years ago...Paul flew into Atlanta with 3 other boys....here's there story:

On August 2, 1997 the Atlanta Fulton County Stadium was demolished. Although the concrete crumbled to the ground in less than 30 seconds, certain events within its 32 year history passed on into perpetual legend at that moment. Hank Aaron's record breaking 715th home run in 1974 occurred here as well as the Braves 1995 World Series win, but one of the most fabled events happened just four months after the stadium's completion when the most famous band in the world came to pay a visit to Atlanta.

The date was August 18, and The Beatles were on their 1965 nine-city North American tour. The first date had been their legendary record-breaking Shea Stadium concert in New York. Next were two shows were at Toronto's Maple Leaf Gardens after which The Beatles headed south. The tickets for the Atlanta show had gone on sale a couple of months prior. The field level seats (which sold out) were $5.50 and the upper level seats $4.50. In the days leading up, The Journal and The Constitution had been featuring articles on the upcoming show as well as advice on stadium parking and comments from Atlanta teens. The August 17th edition of The Journal even had an article showing how to give A "Beatle" haircut.

The 18th was a muggy ninety degree day and at 2 p.m. The Beatle's chartered plane arrived from Canada at Hartsfield Airport and taxied to a remote part of the field, out of view from the fans that had turned up at the terminal. Safety concerns now rarely ever permitted The Beatles to disembark while greeting the crowds as they once had. By 1965 the intensity of Beatle mania had increased to a frightening and dangerous point. They discreetly boarded a group of three limousines and headed for Atlanta Stadium.

At the stadium, a locker room was set up as a dressing area and make-shift headquarters for the Beatles and their entourage. Paul McCartney requested a giant fan for use in the un-air conditioned stadium vestibule, while Ringo Starr wishing to wash his hair, requested a hair dryer. The concert promoter hastily supplied a stand-up model commandeered from his wife. Some tables, chairs and half dozen cots were placed in the changing area. The British refer to these as "camp beds". Ringo, upon hearing them referred to as "cots" humorously, climbed onto one, curled up and began sucking his thumb loudly much to the amusement of everyone in the room. The caterer hired to supply The Beatles dinner, inquired if it was true that they prefered hamburgers. The Beatles quickly shot down that rumor and asked if he could get them "corn on a stick" otherwise known to us as corn on the cob.

Outside the stadium the fans had begun to gather waiting for the gates to open, some walking around the perimeter of the stadium, kissing their tickets. Two fifteen year old girls from Florida arrived at 4:30 a.m. that morning. Fans were also arriving from near-by cities not included on the tour schedule. Inside, the giant fan wasn't doing much good and George Harrison had given up hope of getting his guitars tuned properly in the clammy Dog Day atmosphere. Many VIP's dropped by to visit The Beatles who graciously posed for photos and signed autographs. McCartney, never far from his camera took quite a few shots of the proceedings himself.

Approximately 150 reporters (many from high school newspapers) had gathered for The Beatles press conference which began just after 5 p.m. The Beatles answered questions about the tour, their musical tastes and about Paul's girlfriend, British actress Jane Asher. Mayor Ivan Allen then awarded The Beatles the key to Atlanta and proclaimed them honorary citizens. Later the musicians dinned on their catered meal consisting of Top Sirloin, Leg of Lamb, and Pork Loin along with the requested corn on the cob, pole beans, fruit and Apple Pie. The Beatles, so used to surviving on cocktail sausages and soda while on the road, considered this the best meal they'd ever had on tour, So much in fact that they autographed their four china plates for the caterer, John signing his "Thanks for a flat wear".

Out on the ball field the as the daylight began to fade, the stadium's giant floodlights were switched on. The digital clock high above the stands read 6:21 as the gates were opened and the fans began to trickle in. Mal Evans The Beatles roadie, climbs up onto the stage to do his equipment check. The stage, made of scaffolding, boards and white canvas material, is uncovered causing a potential electrical hazard in the event of rain. Baker Audio, the Atlanta company hired to supply the sound system, had no way to estimate how loud the audience was going to be and hauled in every speaker they had. Placing large clusters of speakers at first and third bases, they were able to create about 5000 watts of amplification. Three lines of police barriers had been set up between the stands and the field. Some of them painted bright yellow read; POLICE LINE DO NOT CROSS while others simply said BUREAU OF SANITATION.

Down in the dug-out, un-noticed by the fans, John Lennon peered out to inspect the pre-show situation. He was soon joined by George and tour manager Neil Aspinall who gave the two Beatles their instructions on exiting the tunnel and crossing the field to the stage at show time. They are told that there will be a vehicle behind the stage with the engine running for their hasty exit after their final song. There are to be no encores or delays. George and John then retreated to the locker room until show time. Once back inside, Mal hands The Beatles four freshly-pressed white shirts for the band to wear under their matching blue suits. Paul comments that the suits are more comfortable than the "military" type jackets they had worn at the Shea Stadium show.

At 7:30 the audience witnessed "The London Look Fashion Show" sponsored by Regensteins and featuring music by local band The Atlanta Vibrations who had recently won a "Beatle Battle Of The Bands" contest. By show time the crowd swelled to approximately 30,000. The show's emcee's were Tony Taylor and Paul Drew both of WQXI - AM ("Quixie In Dixie") who introduced each act preceding the Beatles. The first set was by King Curtis who was followed by a go-go dance troop called The Discotheque Dancers, then Cannibal and The Headhunters, Brenda Holloway and finally Sounds Incorporated.

Right: This humorous ad from the Atlanta Journal (August 18, 1965) reads:
"AN INVITATION TO THE BEATLES
Boys, what you need is a good old-fashioned non-English Dinner of Pot Likker, Cracklin' Corn Bread, Streak-O-Lean, Turnip Greens, Barbecued Spare Ribs, Picnic Fried Chicken, Hot Biscuits and Sorghum Syrup. It's on the table now waiting for you, Tax and Duty Free. Guaranteed to grow another mop on your chest and lower your YEAH! YEAH! YEAH! Two octaves."

When the stadium clock read 9:37 Paul Drew introduced The Beatles who suddenly appeared from the third base dug out and sprinted to the stage. The crowd erupted into one continuous earth-shaking scream and the stands lit up with camera flashes that sparkled like fireworks. A Beatles stadium concert didn't need a light show or special effects; instead there was the awe-inspiring spectacle of their fervent audience. The Beatles plugged in and launched into their hit "Twist and Shout" followed immediately by "She's A Woman". As Paul began to introduce their third number, he stopped apparently amazed that he could hear his own voice and commented "It's loud isn't it? …Great!" Over the last two years of Beatle mania, the band had grown accustomed to being drowned out by their audience and could rarely hear their own music. McCartney in particular seemed to be delighted with the sound at Atlanta Stadium and Baker audio was later approached by The Beatle's management to consult on some subsequent U.S. shows.

The show continued with "I Feel Fine", "Dizzy Miss Lizzie", "Ticket To Ride", "Everybody's Trying To Be My Baby", "Can't By Me Love" and "Baby's In Black" which John humorously introduced as "Baby's In Black…Pool". The next song, featuring Ringo's only lead vocal for the night, was "I Wanna Be Your Man" during which Paul broke a string on his trademark Hofner bass guitar. After Paul swapped his bass for another, they played "A Hard Day's Night". The crowd showed no signs of calming down. The six first-aid stations filled up with girls who had fainted, overcome by being in the same stadium as their idols. Girls at field level threw themselves directly over the railing into the arms of the 150 policemen hired to keep the fans from charging the stage.

The Beatles gave a very energetic performance and seemed (possibly because they could hear themselves) musically tighter than at the Shea Stadium Show. After singing "Help" (their newest hit then) John switched from his guitar over to a Vox organ, Paul thanked the audience for coming and then belted out the opening to their final song "I'm Down". A few seconds after finishing, the Fab Four were down the stairs and into their limo. Accompanied by a police escort, they made tracks for the airport, with about 30 fans chasing behind. The Beatles plane took off just before midnight, bound for Houston where they had a 3:30 show the following afternoon. In just less than ten hours after they had arrived, they had already gone.

The August 19th issues of The Journal and The Constitution featured photos, articles and comments about the show and reported the attendance to be 34,000. It would turn out to be the only concert the Beatles ever played in Atlanta as the group ceased touring the following year. Mayor Allen was Quoted: "they're excellent boys, the only improvement I'd make, I'd cut their hair a little bit".