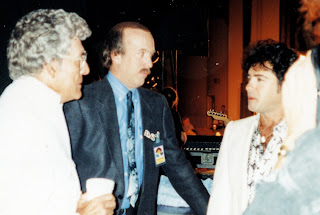 (December 18, 2009) - Legendary guitarist, artist, and hit songwriter Billy Burnette underwent a quintuple bypass surgery on Dec. 16.  Burnette, a former member and guitarist for Fleetwood Mac, had just returned from tour as a guitarist for John Fogerty when he felt short of breath and went to the hospital. Doctors admitted Burnette right away and successfully performed open heart surgery.  Billy is currently at   in where he is recovering.

Burnette, born in , is the heritage of classic American music.  The son of rock-a-billy pioneer Dorsey Burnette, who with his brother Johnny, blazed the trail for the birth of rock and roll with the Rock N’ Roll Trio.  Their music influenced everyone from Elvis Presley to the Beatles.

Burnette recorded his first record for Dot Records at the age of seven, and by the time he was eleven he was touring the world with Brenda Lee.  He has made numerous records as a solo artist and as a band member.  In 1985, Burnett was nominated best new country male vocalist. And in 1987, he joined Fleetwood Mac and spent nine years as part of one of the world’s biggest rock bands.