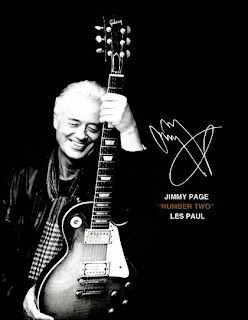 Nashville, Tennessee….December 21, 2009…. Gibson Custom announces the Gibson Custom Jimmy Page Number Two Les Paul Limited Edition guitar modified by the legendary Jimmy Page himself.  Every musician knows that late ’50s Sunburst Les Paul Standards are hard enough to come by as it is. Obtaining a pristine and exemplary ’59 ’Burst and modifying it for heightened performance and vastly expanded tonal options? Unheard of… unless, of course, you’re Jimmy Page. That’s exactly what the legendary Led Zeppelin guitarist, perhaps the world’s most iconic Les Paul player, did with his own ’59 Les Paul Standard, and now—thanks to the extreme efforts of Gibson’s Custom Shop and the intimate cooperation of Jimmy Page himself—the artist’s hallowed “Number Two” Les Paul is available to mere mortals, in the form of the Custom Shop Jimmy Page “Number Two” Les Paul. Produced in strictly limited numbers, with two levels of aging, this guitar captures the look, feel, sound, and versatility of one of the greatest artist-owned Les Pauls of all time, and it is likely to disappear from authorized Gibson dealers in record time.

The 1959 Les Paul that has come to be known as “Number Two” was purchased by Page in 1973 after trying for some time to acquire an exceptional second Les Paul. This was several years after having acquired his other legendary Les Paul—“Number One”, a ’59 ’Burst with shaved-down neck profile and no serial number—from Joe Walsh. “Number Two” was essentially all original when he acquired it. Jimmy did have some modifications done to the neck shape so that it would more nearly match the feel of his "Number One". The neck is certainly slim but not to such extremes as the now-ultra-slim neck on “Number One”. It had a strong, beautiful sunburst finish with a red element that had faded to a dusky amber-brown, along with a clear serial number dating it to 1959. Page played this Les Paul frequently through his days with Led Zeppelin, and in the early ’80s decided to make it an even more versatile instrument. Page also added that he wanted to "explore the full range of what the two humbuckers have to offer".  He designed a switching system for coil splitting, series/parallel, and phase-reverse options for both pickups, and employed a skilled electronics technician to devise a working schematic and make his sonic vision a reality. The result comprised a push/pull pot on each of the guitar’s four standard controls, plus two push-button switches hidden beneath the pickguard, all mounted on a ’59 Les Paul Standard that is otherwise a superb example of the breed, both in tone and playability.

The Custom Shop Jimmy Page “Number Two” Les Paul was recreated with intense, inch-by-inch examination of Page’s original guitar, inside and out. The process of getting it right involved the production of a number of hand-built prototypes, each of which was checked and critiqued in detail by Page himself. Approval of the final iteration was only offered after the legendary artist had intricately examined and extensively played this last prototype in his London home—after which it was given the thumbs-up, worthy of being the template for the Custom Shop Jimmy Page “Number Two” Les Paul. Only 325 examples will be produced in total: The first 25 instruments are to be aged by vintage-reproduction master Tom Murphy then inspected, played and hand signed and numbered by Jimmy Page personally. An additional 100 guitars will be given the extensive aging treatment and 200 will be finished to Gibson’s VOS specs.

The Custom Shop Jimmy Page “Number Two” Les Paul precisely follows the body lines and dimensions of the original ’59 Les Paul Standard, with a gently arched carved top and rounded lower bout, and combines the classic tonewood combination of mahogany back and carved maple top. The body’s back is cut from a single piece of solid, lightweight clear mahogany, and capped with a two-piece top of figured  Eastern  maple that is carved into a period-correct “dish”, or arch.

The Custom Shop Jimmy Page “Number Two” Les Paul’s body woods present the classic combination that helped to make the Les Paul Standard a legendary instrument in the first place. The marriage of these tonewoods offers good clarity, definition and treble bite from the maple, and excellent depth and richness from the mahogany, all of which are elements that are found in the legendary tone of the original ’59 Les Paul Standard. This is one of the most revered wood combinations of all time, and truly offers a “best of both worlds” design in the way that mahogany and maple complement each other to offer superior resonance, sustain, depth, clarity, and definition.

The Jimmy Page “Number Two” Les Paul is finished in the Gibson Custom Shop’s painstakingly devised “Page Burst Version Two”, a sunburst finish that accurately replicates the deep, rich, reddish-brown to amber appearance of the original guitar, and which has been approved by Page himself.

This intricate finishing process involves several stages of applying proprietary toner and shading to accurately replicate the fading of a 50-year-old Sunburst Les Paul with the distinctive characteristics of this particular guitar. Like the great Les Pauls of the late ’50s, the Jimmy Page “Number Two” Les Paul is finished in nitrocellulose lacquer with minimum build-up, in an effort to produce a finish that breathes with the guitar and enhances natural resonance, and will age elegantly and naturally to continually enhance the appearance of this reborn classic.

Once the finishing process is complete, 125 examples of the Limited Run Jimmy Page “Number Two” Les Paul will be hand-aged in the image of Page’s original 1959 Les Paul. A further 200 guitars will receive Gibson’s much-admired VOS (Vintage Original Spec) treatment, which gives an “antiqued” patina to the guitar’s finish and hardware, replicating the look of a gently aged, 50-year-old instrument.

The neck of the Custom Shop Jimmy Page “Number Two” Les Paul is constructed from one piece, quarter-sawn, lightweight mahogany for improved strength and resonance. The Luthiers in Gibson’s Custom Shop carefully match the grains and weights of these guitars’ bodies and necks to optimize tone and sustain.

Gibson invented the truss rod in the 1920s, and the company’s traditional truss rod, as used in all late-’50s Les Pauls, is installed in the neck of the Jimmy Page “Number Two” Les Paul. Found in most all of our guitars, this truss rod is highly responsive to the individual adjustments you’ll want to make to personalize and optimize string action and sustain.

The neck on the Custom Shop Jimmy Page “Number Two” Les Paul is carved to replicate the slim, C profile of the guitarist’s own “Number Two”, a 1959 Les Paul Standard with a slightly modified neck.

Just like the original Les Pauls of the late ’50s, and many classic Gibson models, the Custom Shop Jimmy Page “Number Two” Les Paul headstock is carefully angled at Gibson’s traditional 17 degrees, which increases pressure on the strings and helps them stay in the nut slots. An increase in string pressure also means there is no loss of string vibration between the nut and the tuners, which equals better sustain.

The traditional, period-correct Gibson logo is inlaid in mother of pearl across the top of a holly headstock veneer, with “Les Paul Model” silkscreened in gold along the headstock face.

In order to recreate “Number Two” to Jimmy Page’s standards, ever tone-enhancing detail used in the original 1959 Les Paul was vital to the picture. The angled, classical-style peg head and mahogany neck are part of this, and they work together to provide exceptional tonal richness and resonance from the neck, with a good string definition and sustain.