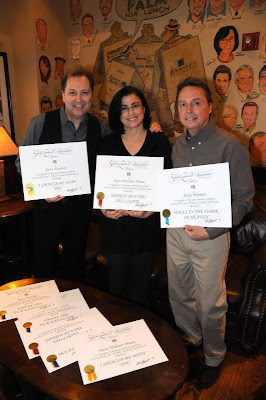 Awards were presented at the luncheon for:

“Nothin’ But the Taillights” – recorded by Clint Black – 3 million

“Where the Blacktop Ends” – recorded by Keith Urban - 2 million

The rest were recorded by Wariner:

“Been There” – duet with Clint Black

“Steve is the quintessential combination of artist, musician, and BMI songwriter,” said Jody Williams, BMI Vice President, Writer/Publisher Relations.  “Over the past three decades, he has continued to create a deep catalog of country hits that remains both popular and artistically compelling, evidenced most recently by his 2010 Grammy nomination. We at BMI couldn’t be prouder to represent him.”

Williams placed the million-air milestone in perspective by noting that playing a song back-to-back one million times would take about six years.

“I’m so thankful to BMI for the support they’ve shown in the 35 years we’ve worked together,” said Wariner.  “Of course I also have to thank Garth, Clint, Keith and the other artists who have recorded some of my songs, country radio for playing them, and the fans for listening to and requesting them.”

With a total of 15 Million-Air Awards, Wariner reaches a rare plateau achieved by only a fraction of BMI writer/artists including Chuck Berry, Stevie Nicks, Randy Owen, Hank Williams, Jr., Mike Love of the Beach Boys and Steve Winwood.

During his career Wariner has charted over 30 top-10 singles, including 14 #1 hits.  In 1998 he won the Country Music Association’s Single and Song of the Year awards for his #1 hit, “Holes in the Floor of Heaven,” which was also the Academy of Country Music’s Song of the Year in 1999.  He joined the Grand Ole Opry in 1996.  As a songwriter he has earned 16 BMI Country Awards over the last three decades, in addition to his 15 Million-Air Awards.  In 2002 he started his own record label, SelecTone Records.  He was inducted into the Music City Walk of Fame in 2008.