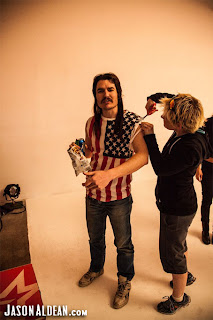 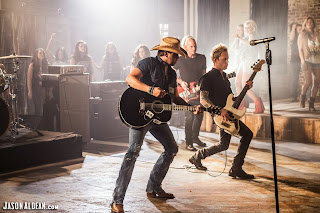 Nashville, TN – March 20, 2013 – ACM Entertainer of the Year nominee Jason Aldean is giving Entertainment Tonight the exclusive first look at the new video for his current Top 20 single "1994." Entertainment Tonight will air a special behind the scenes look from the set of the video tonight and will debut the video in its entirety on www.etonline.com exclusively through the weekend. Entertainment Tonight airs on CBS. Shot in Nashville just last week and directed by Wes Edwards, Aldean called on a few friends to make cameo appearances including Luke Bryan, Hayden Panettiere, Lady Antebellum, Dierks Bentley, Little Big Town, Jake Owen, Florida Georgia Line and Thomas Rhett. In the clip, each artist hops into the “Diffieizer” – an arcade-style video booth that is a throwback to the year 1994. “It's really cool that so many of my buddies agreed to come down and have a little fun with us…this is the kind of song where you just can't take yourself too seriously,” said Aldean. “There are a lot of ridiculous dance moves, a couple mullets, some suped up cars and a lot of other really funny reminders of the mid-90's…the whole thing cracks me up." “1994” is the third single off Aldean’s PLATINUM album NIGHT TRAIN. It follows seven consecutive No. one songs for Aldean and 11 career No. ones. Additionally, Aldean will be performing on the Academy of Country Music Awards Sun., April 7, on CBS. He is nominated for three awards in the categories of Entertainer of the Year, Male Vocalist of the Year and Vocal Event of the Year for “The Only Way I Know” feat. Luke Bryan and Eric Church. For more information, visit www.jasonaldean.com.