Kenny Chesney is Off and Running 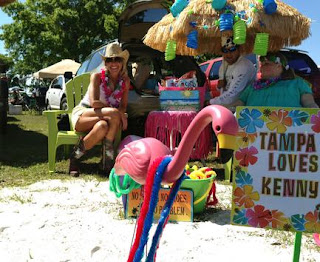 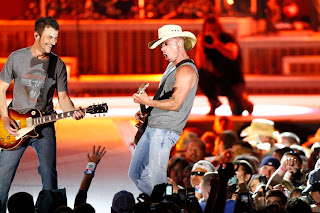 Tampa, FL: They were waving pirates flags in Section 303 and 334, at the top of Raymond James Stadium when the lights came up and Kenny Chesney strode to the mic to kick off his 2013 tour in the home of the Buccaneers. For the next two-plus hours, Chesney played old songs, his brand new song and some real surprises. “We’ve been waiting to get back out here, and it felt gooood,” Chesney said. “It was our third time coming to Tampa to kick off the tour, and there’s a reason. It’s Florida… It’s warm… It’s near the ocean… and these fans are just off the chain.” They passed license plates that said “No Shoes” and “Nation,” high school yearbooks and oversized pirate flags to the stage. They sang along to “You & Tequila,” “Everybody Wants To Go Heaven,” “Anything But Mine” and “Out Last Night.” They got to see Kacey Musgraves duet with Chesney on the #1 “Come Over.” They were thrilled to hear No Shoes, No Shirt, No Problem’s “On The Coast of Somewhere Beautiful” and an all-alone moment for the intimate “Old Blue Chair.” 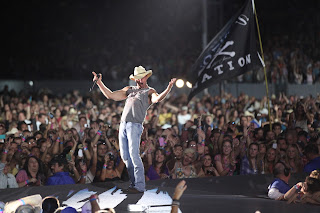 With spring training underway, ESPN analyst Jon Gruden, Philadelphia Phillies pitchers Roy Halladay and Cole Hamels, as well as Yankee Kevin Youkils and USC 4 year quarterback Matt Barkley, whose awaiting the NFL draft, joined 47,492 members of the No Shoes Nation for the start of another season on the road for the man who’s sold over a million tickets each of his past 10 tours. “We brought back some songs we’ve not done in a while, like ‘How Forever Feels,’ stripped things back a bit for ‘You & Tequila’ and even pulled out one no one in the band saw coming with ‘Old Blue Chair’,” he said of the tour’s first show. “It was as fluid as it’s ever been – and the music really took us places tonight. Trusting the music, and the fans, is a big part of it.” Joining Chesney for the first night was CMA Album of the Year winner Eric Church, who turned in a set that was as intense as it was crowd-rallying. Texas’ Academy of Country Music award winners the Eli Young Band and acclaimed newcomer Kacey Musgraves also did sets that drew out the crowd. “I think this is one of the best packages we’ve had. It’s very progressive, very music and very much about connecting with the fans. I think it’s going to be an incredible summer.” With “Pirate Flag” racing up the Country Singles chart, the singer/songwriter from Luttrell, Tennessee is getting ready to release Life On A Rock April 30.Largely written by Chesney, it is a reflective album that considers the friends we make, the mark they leave and the reasons living life to the hilt is so worth doing.