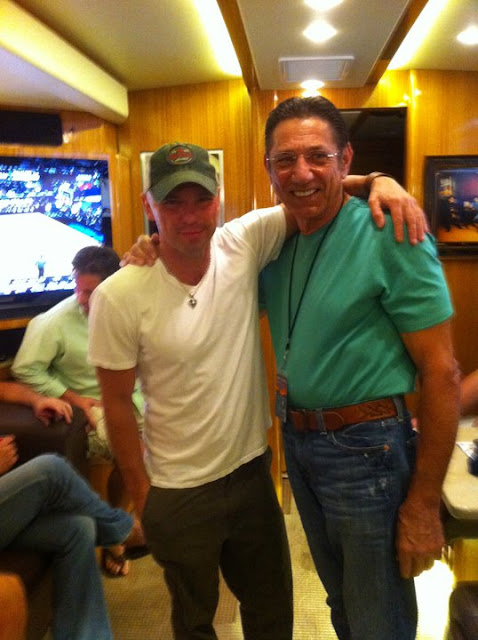 “LIVE A LITTLE” - SUMMER IS OFFICIALLY ON AS KENNY CHESNEY GOES COASTAL
PRESENTS KENNY CHESNEY’S “GOIN’ COASTAL” TOUR LAUNCHES BIG!
– Kenny Chesney’s “Gone Coastal!” After months of planning, preparation and anticipation, Corona Presents Kenny Chesney’s “Goin’ Coastal” Tour sailed into sunny  where the fans had been waiting a long time for a party that only Kenny Chesney can throw!
The tour opened on Thursday night in , and The Palm Beach Post heralded Chesney’s performance as “Flawless,” and added, “Chesney holds thousands of fans in his spell. Everyone is absolutely focused on him for two solid hours of on-your-feet time.”
The show also included Chesney’s friend and duet partner Uncle Kracker on the #1 song, “When the Sun Goes Down” and singer Billy Currington who is enjoying his 4th consecutive # 1 single. Chesney also welcomed to the stage special guest reggae singer Mishka for Bob Marley’s “Three Little Birds.”
The party in West Palm Beach also included friends of Chesney’s such as football legend Joe Namath, Jason Witten of the Dallas Cowboys, Mike Vrabel of the Kansas City Chiefs, Wes Welker and Matt Light of the New England Patriots and Steve Hutchinson of the Minnesota Vikings.
Saturday marked the first of 11 stadium shows when the tour cruised into ’s Raymond James Stadium. By 2:00 pm the parking lots around the stadium were overflowing with tailgaters partying to Chesney’s music, grilling and warming up to welcome Chesney back to the stadium where he hadn’t played since 2006.
When Chesney took the stage on Saturday night, the sold-out crowd of 50,548 went coastal! The two-plus hour set included many of his 21 #1 hits, from “How Forever Feels” (1999) to his latest #1 song, “Somewhere with You,” plus album cuts and classic songs. He also welcomed some special musical guests to join him, including a 30-minute jam with Zac Brown Band. In describing the  concert,  at the St. Petersburg Times wrote: “man, oh, man, did we need a day like this one and a concert like that one” while drawing comparisons between Chesney’s band, AC/DC, Alan Jackson, and U2.
The atmosphere was lively backstage, too, with lots of family and friends. Also on hand were New York Yankees Nick Swisher, Super Bowl winning and Monday Night Footballcommentator Jon Gruden, Philadelphia Phillies players Cliff Lee, Roy Halladay, Roy Oswalt and Chase Utley, and former player John Smoltz.
The tour now sets the compass north for next weekend’s shows in ,  (3/24); ,  (3/25); and  (3/26).  Chesney’s current album,Hemingway’s Whiskey, is nominated as Album of the Year from the , and it includes the current song, “Live a Little,” and the #1 singles “The Boys of Fall” and “Somewhere with You.”