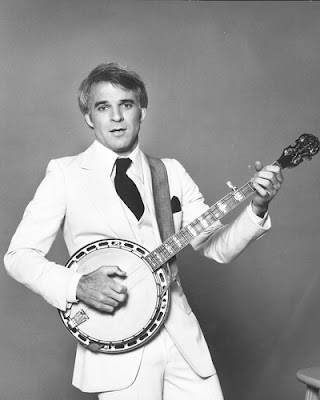 Steve Martin will perform a song that he wrote from his musical debut CD, The Crow: New Songs for the Five-String Banjo (Rounder), on the American Idol finale this Wednesday, May 20th. The Crow: New Songs for the Five-String Banjo will be released today (May 19) to all music retailers. After a successful performance at Club Nokia in Los Angeles, Martin will perform music with The Steep Canyon Rangers band (Nitty Gritty Dirt Band founder) for three shows at the Rubin Museum of Art in New York on May 27 and 28. Steve will be a featured guest at the Grand Ole Opry in Nashville on May 30 during Vince Gills’ portion of the concert/radio shows. In addition to Gill, several of the other players who performed on The Crow will perform with him including Gary Scruggs, Tim O’Brien and Stewart Duncan. Martin will also be appearing on Tavis Smiley on May 19, the Ellen DeGeneres Show on May 25 and on Jimmy Fallon on June 2.