Opry member Charlie Daniels surprised Eddie Montgomery and Troy Gentry by approaching them from the Opry House audience and making his way on stage. “I have been chosen to do something very special,” Daniels said. “I have known you guys for a long time, and I am very proud of all your accomplishments,” he continued before offering, “if you agree to it, on June 23rd you’re gonna be made members of the Grand Ole Opry!”

Montgomery and Gentry, both visibly surprised and moved, exchanged hugs with each other and with Daniels, after which Gentry managed, “I’m speechless” and Montgomery borrowed a handkerchief from Daniels to wipe his eyes.

After composing themselves, the two kicked into their current hit, “One In Every Crowd,” while Gentry noted his surprise, yelling out to the Opry staff and Daniels, “y’all got us!”

“With each and every Opry performance Eddie Montgomery and Troy Gentry have offered, it has been quite apparent that not only do they know how to move audiences with their unique brand of music, but they too are moved by the connection they share with the Opry and its rich legacy,” said Opry Vice President and General Manager Pete Fisher. “All of us at the Opry eagerly await the 23rd of June when Montgomery Gentry will formally join the ranks of the Opry's esteemed membership roster.” 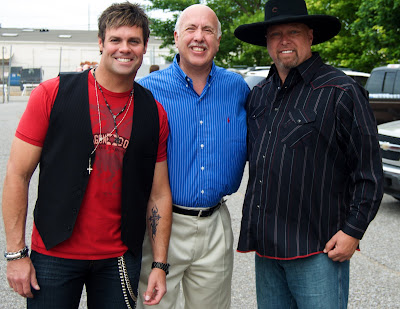