March 24, 2009
The boys of Summer getting ready in Clearwater....Phillies Jenkins knocks one out of the park! 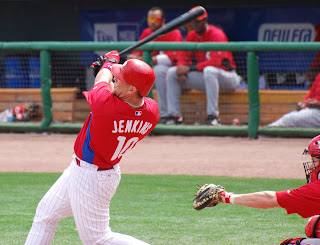 Today:
Truck needed 2 tires( they made it 68,000 miles so not bad) cha-ching over 400 bucks...Front brakes made it 68,000 miles too..cha ching.....Never has been aligned...cha-ching.....WHEW and the replaced back tire had a huge nail..that would have been ugly... Don't you love expenses like that???? Necessary evil..BUTTTTTTT..
Newsgathering for the morning...Dems want to save the newspapers...( see Facebook page..in case you don't have that it would be search: jimmy carter nashville)...CBS follows the trend of recent country award shows and wants NOTHING to do with legacy artists dead or alive...It's an
infomercial for the current acts...I understand how the game is played but it is still wrong. The Grammy's still control their show somewhat and do respect the BB Kings etc...Country NOPE..what's wrong with this picture?
back to news hunting...some wooly booger stories...shoot out at the Burger King...24..dancing...lots more...find me on the radio in the morning....