Pollen off the scale...even on top of Old Smokey 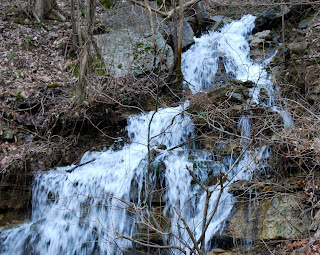 My truck looked like I had been in a dust storm...a storm of pollen. The pines trees were sending off gas like pollen...amazing time of the year for those like me with issues in the breathing area. This stream above is around 2500 feet on Monteagle between Chattanooga and Nashville...stop right there on the Interstate and popped off a shot.
The weather was crazy over the weekend but not unprecedented. 4 inches of rain in Macon for the Cherry Blossom festival. Still Pat Green played and he was excellent!
Tuesday is new keith urban cd day and the cd will sell...its very consumer friendly. Rodney Atkins has one too...
A blog tomorrow about a visit to two Macon eateries well worth mentions and The Ga. Music Hall of Fame.
Sadness though, former Opry manager Hal Durham died. Good man...did a lot to bring the Opry into today. Also sadness for the families of the NC nursing home massacres. Mass shootings seem to be back. My law enforcement dad always had several observation tips. One was,never trust a man with a beard,he's often hiding something. Hmmm a life time of observation says thats true more than 75% of the time.....The Judge also thought men who regularly wore a bow tie were a little fruity. If found those men to be indeed eccentric.
ACM's in Vegas...Country Thunder in Arizona. Are fans that interested in today's award shows. are they so pre-chewed to make them a drag? Can't see to work up the feeling to go...Going to Vegas for the NAB in 2 months. That will be enough:) Next Blog is Macon and Otis!