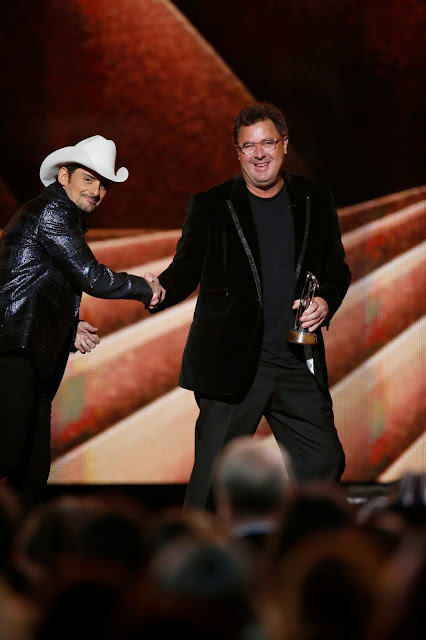 NASHVILLE – CMA presented the Irving Waugh Award of Excellence to Nashville treasure Vince Gill during “The 48th Annual CMA Awards,” which aired tonight on the ABC Television Network. Gill choked up during a video salute aired during the Awards as artists including Rodney Crowell, Merle Haggard, Emmylou Harris, Taylor Swift, James Taylor, and Keith Urban paid tribute to Gill’s artistry and impact on Country Music. “There wouldn’t have been a CMA Awards on television without Irving,” Gill told reporters back stage. "He put the show on and class was always the ultimate to him. He wanted the men to dress up.” The Irving Waugh Award of Excellence is awarded to an individual who is the originator and caretaker of demonstrated ideas and actions that have dramatically broadened and improved Country Music's influence on a national or international level for the benefit of the industry. It is the intention that these ideas and actions typically will have run a course of years and shall have a proven historical impact on the format. “Vince Gill’s career is the very definition of excellence,” said CMA Chief Executive Officer Sarah Trahern. “Vince is well known for his outstanding musicianship, artistic integrity, humor, philanthropy, and undeniable support of Country Music and this community. He is admired by many and is a very deserving recipient of this honor.” The Award was created in 1983, when it was presented to its namesake Irving Waugh, a visionary who was instrumental in the creation of the CMA Awards. Since then, the Irving Waugh Award of Excellence has only been presented four times including Frances Preston (1987), a legendary figure in BMI history; Jo Walker-Meador (1991), the Executive Director of the Country Music Association from 1962 to 1991; the iconic Johnny Cash (2003); and longtime, former producer of the CMA Awards, Walter Miller (2009). Gill has a long history with the CMA Awards himself, including hosting the annual gala 12 times (1992-2003). He has 53 career CMA Awards nominations including one in 2014 for CMA Musical Event of the Year with Paul Franklin for their album, Bakersfield. He has claimed the crystal trophy 18 times including one for Single of the Year for his breakthrough hit “When I Call Your Name” (1990), two for Entertainer of the Year (1993, 1994) and five consecutive times for Male Vocalist of the Year (1991-1995). In 2007, Gill was inducted into the coveted Country Music Hall of Fame, which is determined by the CMA Panel of Electors. Gill is one of those unique individuals who lives in the margins. He has a deep appreciation for the values and traditions of the format, but he also has a reputation for encouraging and helping emerging talent. He has an impeccable work ethic and an equally strong sense of humor. He is a public figure with an intense, personal loyalty to family and community. Revered by the industry, in 1991 he joined the Grand Ole Opry. His vocal prowess, emotionally-charged songwriting, and world-class guitar chops are undisputed and have bridged formats and set the standard for excellence, broadening the audience for Country Music. Since 1990, Gill has received 20 Grammy Awards, sold more than 26 million albums, and was honored with a star on the Hollywood Walk of Fame. His passion for golf led him to start the Vince Gill Pro Celebrity Invitation Golf Tournament, better known as “The Vinny,” to help support junior golf programs in Tennessee. He and his wife, Amy Grant, are well-known for the charitable efforts in the community and Gill was recently awarded the Leadership Music Dale Franklin Award in recognition of his philanthropic efforts. 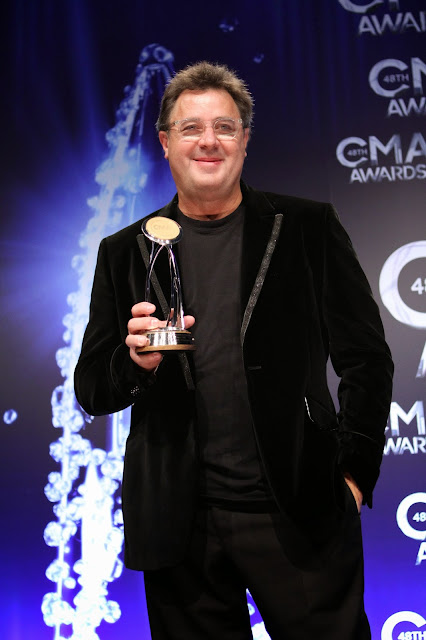