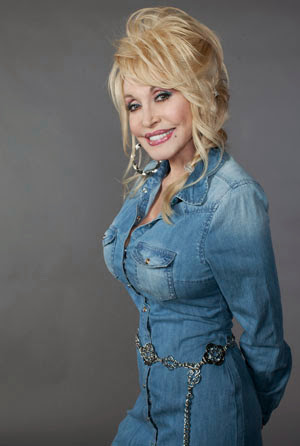 NASHVILLE, Tenn. (November 5, 2014) – Dolly Parton is the most honored female country performer of all time. Achieving 25 RIAA certified gold, platinum and multi-platinum awards, she has had 25 songs reach number 1 on the Billboard Country charts, a record for a female artist. She has 41 career top 10 country albums, a record for any artist, and she has 110 career charted singles over the past 40 years. All-inclusive sales of singles, albums, hits collections, paid digital downloads and compilation usage during her Hall of Fame career have reportedly topped a staggering 100 million records world-wide. She has garnered 7 Grammy Awards, 10 Country Music Association Awards, 5 Academy of Country Music Awards, 4 People’s Choice Awards, 3 American Music Awards and is one of only five female artists to win the Country Music Association's Entertainer of the Year Award. Dolly was inducted as a member of the Country Music Hall of Fame in 1999. And the litany goes on. Now in 2014, Dolly has just been nominated for a People’s Choice award in the Favorite Female Country Artist category. “I am so excited to be nominated for a People’s Choice award. It is always a good feeling to be recognized for whatever you do,” says Dolly Parton. “This year has been an amazing year! I released a new album Blue Smoke, traveled to Australia, Europe, and across America and even performed for 170,000 people at one show; woo that makes me tired just saying it. But seriously, I am honored to be nominated amongst these great gals.” Dolly’s career has spanned nearly five decades and is showing no signs of slowing down. An internationally-renowned superstar, the iconic and irrepressible Parton has contributed countless treasures to the worlds of music, film and television. Some of her hit films have included Nine to Five, Steel Magnolias, The Best Little Whorehouse in Texas, Rhinestone, Straight Talk, and Joyful Noise. Parton received two Oscar® nominations – one for writing the title tune to Nine to Five and the other for Travelin’ Thru from the film Transamerica. Fans can begin voting now at: http://vote.peopleschoice.com/#!/home/all/62/3 People’s Choice Awards will air live from the Nokia Theater L.A. Live on Wednesday, Jan. 7, 2015 (9:00-11:00 PM, ET/delayed PT) on CBS. About the People’s Choice Awards: People's Choice, the original metric of pop culture, is dedicated to providing entertainment fans with a platform to express their opinions. The annual People's Choice Awards live telecast gives fans a chance to honor their favorite entertainers, while the People's Choice official website, PeoplesChoice.com, lets enthusiasts voice their choices year round through polls and editorial features. People's Choice Awards celebrates fan favorites in movies, music and television and is the only major awards show where real people - not industry insiders - determine the nominees and winners, setting it apart from other awards shows. In the age of American Idol, Dancing with the Stars and countless other franchises where the fans decide the outcome, People's Choice was ahead of its time. For the past 40 years, many of Hollywood's most popular actors, musicians, television shows and movies have been named People's Choice Award winners by their fans. The event began in 1975 with 14 categories; winners included Mary Tyler Moore, Barbra Streisand and The Sting. In 2013, there were over 40 categories, honoring Katy Perry, Robert Downey, Jr. and The Hunger Games.