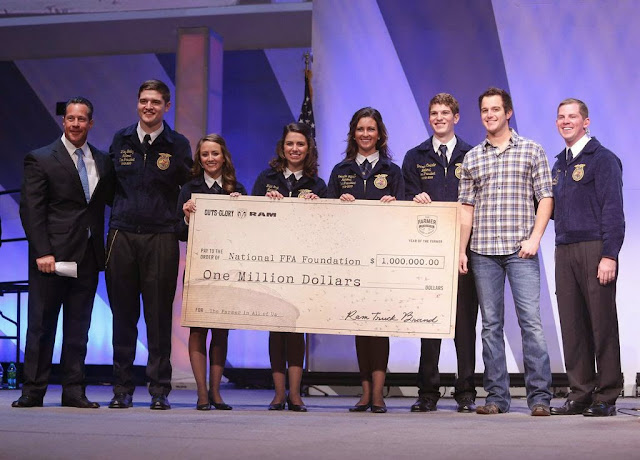 Mercury Nashville Platinum recording artist Easton Corbin saw a big payoff to his support and partnership with the National FFA Organization, Ram Trucks and their Next Crop Initiative’s “The Year of the Farmer” celebration. As part of the “The Year of the Farmer” celebration, Corbin - a former FFA member - spent the year traveling the roads of rural America to meet and raise money for the local FFA chapters and young members around the country. Click HERE for a brief recap of his year-long work with the Next Crop Initiative. Ram Trucks kicked off the “Year of the Farmer” in February with the debut of their Super Bowl commercial, “Farmer,” which has garnered over 16 million views on YouTube. For every one million views, Ram pledged to donate $100,000, for a maximum donation of $1 million; viewers overwhelmingly supported the two-minute video, reaching 10 million views within days. As a result, a $1 million check was presented to the National FFA Foundation, on behalf of Ram Trucks, by Corbin and Ram Trucks President and CEO Reid Bigland during the first session of the 86th National FFA Convention and Expo, held in Louisville, Ky. As the “Farmer” video suggests, many budding farmers – including FFA members – were inspired by their grandfathers and fathers. As a former member of the Trent FFA Chapter in Florida, Corbin was no different. “I remember when I was in sixth grade and [my grandfather] asked me if I wanted to show a cow and I was like, ‘well yeah!’” Corbin said. “So, my grandpa was a big influence on me. He’s always been such a hardworking guy. I’ve always looked up to him.” About National FFA Organization The National FFA Organization is a national youth organization of 557,318 student members as part of 7,498 local FFA chapters in all 50 states, Puerto Rico and the Virgin Islands. The FFA mission is to make a positive difference in the lives of students by developing their potential for premier leadership, personal growth and career success through agricultural education. The National FFA Organization operates under a federal charter granted by the 81st United States Congress and it is an integral part of public instruction in agriculture. The U.S. Department of Education provides leadership and helps set direction for FFA as a service to state and local agricultural education programs. For more, visit the National FFA Organization online at www.FFA.org, on Facebook, Twitter and the official National FFA Organization blog. About Easton Corbin Mercury Nashville recording artist Easton Corbin is lauded for his traditional country sound, authentic lyrics and mastery of understatement. His self-titled debut album released in 2010 and spawned back-to-back hits “A Little More Country Than That” and “Roll With It;” making him the first country male artist in 17 years to have his first two consecutive singles reach No. 1. In 2012 the Gilchrist County Florida native released his sophomore album, All Over The Road, which included the Top 5 hits “Lovin’ You Is Fun” and “All Over The Road.” Corbin set a career-best debut on Country Airplay with his current single, “Baby Be My Love Song," the second single from his upcoming album. As a former FFA member Corbin recently partnered with Ram Truck brand and FFA to celebrate the “Year of the Farmer” by visiting and performing for FFA members in numerous cities along his Fall/Winter tour route.