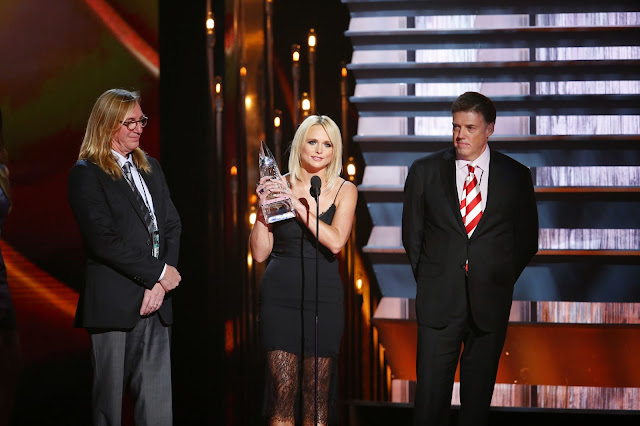 NASHVILLE - Top winner Miranda Lambert collected trophies and broke records, while Luke Bryan picked up the night’s top honor, winning his first-ever CMA Award for Entertainer of the Year at “The 48th Annual CMA Awards.” Lambert won four awards Wednesday, including her second Album of the Year trophy for Platinum. She joined husband Blake Shelton, in setting a mutual record as each clinched their fifth consecutive victory in the Female and Male Vocalist of the Year categories. “I don’t even know what to say. I just can’t believe I’m standing here,” Lambert told the crowd. “I can’t believe this is my life, that this is my job. Thank you, fans, for that.” She also gave a shout out to female singers and songwriters who haven’t received the same kind of acclaim: “I’m trying to represent for you girls.” Lambert, who has won 11 CMA Awards since 2010, passed four-time winners Reba McEntire and Martina McBride in the Female Vocalist category becoming the top winner in CMA Awards history. Shelton moved into a tie for Male Vocalist with Vince Gill and George Strait, claiming his fifth consecutive title. “To be in that category, those two guys you (in the press room) just mentioned, that’s beyond a dream come true,” Shelton said. “That’s stupid.” Shelton dedicated the Award to his personal hero, singer Earl Thomas Conley. 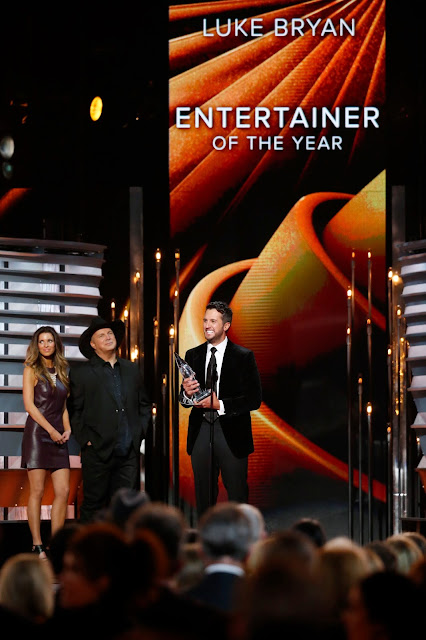 Bryan won the night’s top honor. It was his first CMA Award, and that fact left him amazed. “I have longed and sought for many years to get one of these in my hands,” Bryan said backstage as he cradled his new Entertainer trophy. “To get the respect of the CMA Board and all its voters and win this is a ginormous deal. It’s something that I could not express when I was out on stage when I was winning it. I can’t help but in the back of my mind want some of that respect from this body of people. I’m just really humbled.” Until then, the night belonged to Lambert. She picked up her first win just after the sun rose in Nashville, winning Musical Event of the Year for “We Were Us” with Keith Urban. It was the second year in a row Urban won in the category, one of two Awards announced on ABC News’ “Good Morning America.” Dierks Bentley and director Wes Edwards also picked up an early Award, taking Music Video of the Year for “Drunk on a Plane.” Lambert continued her run as the show started, joining Meghan Trainor on stage for a rendition of the pop hit “All About That Bass” before winning the first telecast Award: Single of the Year for “Automatic.” She returned to the stage midway through the show to pick up her third trophy, Album of the Year for Platinum, produced by Frank Liddell, Chuck Ainlay, and Glenn Worf. It was her second win in that prestigious category after Revolution took the category in 2010. She later performed new single “Smokin’ and Drinkin’” with Little Big Town, before again returning to the stage to accept the Female Vocalist of the Year trophy. Shelton was happier for his wife than he was for himself: “For me and my family, this may be the biggest night of our lives in the music industry.” Kacey Musgraves, the 2013 New Artist of the Year, scored a highlight moment when she sang “You’re Lookin’ at Country” with personal hero Loretta Lynn. She got another one when she returned to the stage for winning Song of the Year for “Follow Your Arrow,” an anthem about equality and individualism, written with Brandy Clark and Shane McAnally. Vocal Group of the Year Little Big Town and Vocal Duo of the Year Florida Georgia Line enjoyed repeat victories. It was the third straight win in the category for Little Big Town and the second straight win for Florida Georgia Line. “I’m shaking, I’m shaking,” singer Brian Kelley said when the duo hit the stage. “How are we still so nervous?” duo mate Tyler Hubbard asked the crowd. Lanky crooner Brett Eldredge, wearing a tuxedo in tribute to his personal inspiration Frank Sinatra, won New Artist of the Year with his mother in attendance. Guitarist Mac McAnally won Musician of the Year for the seventh time, extending his streak for most consecutive wins in the category. Entertainer of the Year Luke Bryan Album of the Year Automatic, Miranda Lambert Produced by Chuck Ainlay, Frank Liddell, and Glenn Worf Female Vocalist of the Year Miranda Lambert Male Vocalist of the Year Blake Shelton Song of the Year “Follow Your Arrow,” by Kacey Musgraves, Brandy Clark and Shane McAnally Single of the Year “Automatic,” Miranda Lambert Vocal Group of the Year Little Big Town Vocal Duo of the Year Florida Georgia Line New Artist of the Year Brett Eldredge Music Event of the Year “We Were Us,” by Keith Urban featuring Miranda Lambert Music Video of the Year “Drunk on a Plane,” Dierks Bentley (directed by Wes Edwards) Musician of the Year Mac McAnally Chevrolet™ is the Official Ride of Country Music. American Airlines is the Official Airline of the CMA Awards.