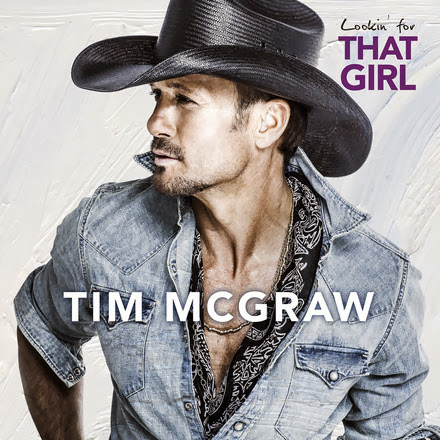 McGraw Unveils Details For The SUNDOWN HEAVEN TOWN 2014 TOUR Nashville, TN- Jan. 13, 2014- Coming on the heels of three consecutive No. one smash hits and a sold out tour in 2013, Superstar Tim McGraw is riding major momentum into the new year with brand new music and plans for an even bigger summer ahead. "Lookin' For That Girl," the lead single from his next Big Machine Records release, is available to radio today and to fans for purchase at iTunes on Jan. 21. Entertainment Weekly is offering a first listen of the song available here. "This last year was unbelievable, and I don't have any plans to let off the gas now. We didn't want to waste any time getting new music out," said McGraw. "With every album, my approach is to push a few of my own boundaries and try things I've never done before. It was hard to choose a lead single off this project because I really felt like we had six or seven good options. I kept coming back to 'That Girl' because even though it may be a little different for me sonically, I couldn't get it out of my head!" The SUNDOWN HEAVEN TOWN 2014 TOUR will kick off in May on the West Coast. McGraw's "characteristically high-octane" (Billboard) show will hit 30 cities over the course of the summer. Fans can purchase tickets beginning Jan. 24 for select cities as part of Live Nation's Country Megaticket at www.Megaticket.com. SUNDOWN HEAVEN TOWN 2014 Tour Cities Sacramento, CA Mountain View, CA Phoenix, AZ San Diego, CA Irvine, CA Pittsburgh, PA Indianapolis, IN Cleveland, OH Hartford, CT Washington, D.C. Philadelphia, PA Virginia Beach, VA Charlotte, NC Raleigh, NC St. Louis, MO Chicago, IL Cincinnati, OH West Palm Beach, FL Tampa, FL Brooklyn, MI St. Clairsville, OH Toronto, ON Atlanta, GA Salt Lake City, UT Albuquerque, NM Houston, TX Dallas, TX McGraw is up for two GRAMMY awards for his Big Machine Records debut, TWO LANES OF FREEDOM, which spawned three back to back No. one songs including the PLATINUM-selling smash hit "Highway Don't Care" with Taylor Swift, featuring Keith Urban on guitar. Over his career, McGraw has sold over 40 million albums, won three GRAMMY’s, 15 ACM Awards, 14 CMA Awards and 10 AMA’s, while simultaneously maintaining a parallel career as a successful actor in such films as the Oscar nominated The Blind Side, Country Strong, Friday Night Lights and the upcoming Disney production, Tomorrowland.