Kasey and The Grammys 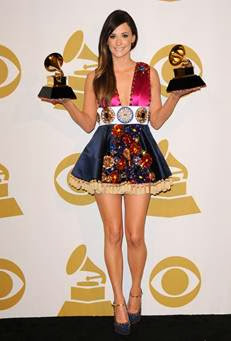 This has been an exciting week for the 25-year old Texas native. On Sunday, Musgraves took home two GRAMMY’S from the 56th Annual Grammy Awards for BEST COUNTRY SONG (“Merry Go ‘Round) and BEST COUNTRY ALBUM (Same Trailer Different Park) making her the first artist in history to win BEST COUNTRY ALBUM with a major label debut. During the telecast of the Grammy Awards, Musgraves performed her penned song “Follow Your Arrow;” a song that Billboard named as its No. 2 Best Song of 2013. Following the performance of “Follow Your Arrow,” Musgraves’ debut album Same Trailer Different Park had the #1 highest percentage sales lift for current albums on all genres. Musgraves is currently on tour with Lady Antebellum on their Take Me Down Town Tour and this summer she will hit the road with Katy Perry on Perry’s Prismatic World Tour. For a full list of Kacey Musgraves tour dates click here.