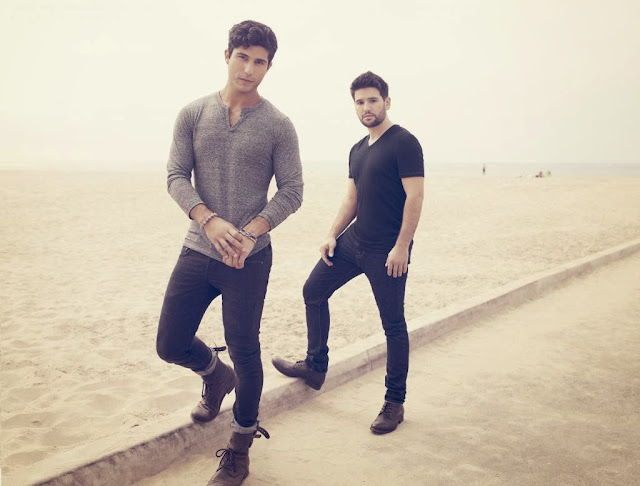 Nashville, TN (January 17, 2014) – Nashville newcomers Dan + Shay will be joining Blake Shelton and The Band Perry on Shelton’s Ten Times Crazier Tour 2014, set to launch this summer in June. Celebrating the recent release of their debut single "19 You + Me," Dan + Shay became the most added new duo of 2013 at Country Radio with their breakout hit, which has impressively already landed in the Top 20 on the charts only thirteen weeks after its introduction. Garnering an impressive 59 first-week adds at Country Radio, Dan + Shay have set a new record for the biggest first week by a new duo in Country Aircheck history. The nostalgic feel-good single was written by the pair along with Nashville songwriter Danny Orton and is the first track from their forthcoming album due out later this year on Warner Bros. Records. A lyric video for “19 You + Me” created by the duo and videographer Patrick Tracy is posted on DanAndShay.com and has just surpassed 1 million views, while the official video shot in Myrtle Beach late last year will be released in coming weeks. Made up of Dan Smyers, a Pittsburgh, PA native, and Shay Mooney, originally of Natural Dam, AR, the two realized they had a special musical connection after meeting at a party at Smyers' house, in his tented out living room only one year ago. What started as a late night jam session among new friends, led to daily writing sessions that resulted in songs which quickly caught the attention of publishers, label heads and radio programmers alike. Currently putting the finishing touches on the yet to be titled release, the debut album is written entirely by Smyers and Mooney, produced by Smyers and co-produced by Scott Hendricks and Orton. Performing as the first of three acts, Dan + Shay are excited to bring their infectious original sound to fans on the upcoming Blake Shelton tour. Markets for the tour are below, with exact dates and venues coming soon. First Announced Cities of Blake Shelton’s Ten Times Crazier Tour 2014 with Dan + Shay: Austin, TX Dallas, TX Little Rock, AR Chicago, IL New York, NY Darien Center, NY Albuquerque, NM Phoenix, AZ San Diego, CA Fresno, CA Sacramento, CA Mountain View, CA Spokane, WA Tacoma, WA Vancouver, BC Boise, ID Salt Lake City, UT Denver, CO Las Vegas, NV Los Angeles, CA For more info, please visit: www.DanAndShay.com