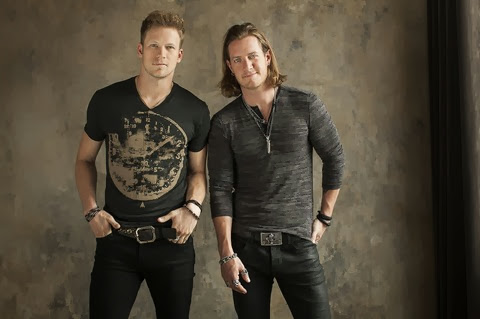 Award-Winning Duo “Stay” On Top With Fourth Consecutive, Multi-Week #1 In US & Canada FGL Joins Jason Aldean’s NIGHT TRAIN Tour 2014 Florida Georgia Line NASHVILLE, TN (January 7, 2014) – Following an epic 2013, it is no surprise that Florida Georgia Line is ringing in the New Year on top. The award-winning duo's breakout MULTI-PLATINUM debut “Cruise” has been named the best-selling digital Country single in history for sales of over 6.6 million downloads by Soundscan. To top it off, their passion-fueled single “Stay” dominated all four Country Radio charts in the US and Canada this week, marking their fourth consecutive, multi-week #1. FGL exploded with their smash “Cruise” and followed with the PLATINUM “Get Your Shine On” and GOLD “Round Here.” To date, more than 10 million tracks worldwide have been sold from FGL’s Republic Nashville debut album, HERE’S TO THE GOOD TIMES, which has been certified PLATINUM in the US and GOLD in Canada. The breakout duo closed out 2013 topping 11 of Billboard’s year-end charts, including: #1 Top Country Artist #1 Top Country Duo/Group #1 Hot Country Songs Artist #1 Hot Country Songs “Cruise” #1 Country Airplay Songs Artist #1 Country Digital Songs Artist #1 Country Digital Songs Title “Cruise” #1 Country Streaming Songs Artist #1 Country Streaming Songs Title “Cruise” #1 Ringtones Artist #1 Ringtones Title “Cruise” Poised to follow in the record-breaking success, FGL's next single will be “This Is How We Roll” featuring country superstar Luke Bryan. The collaboration is from the deluxe version of their chart-topping album, HERE’S TO THE GOOD TIMES…THIS IS HOW WE ROLL, available now. To continue to toast and celebrate with their fans nationwide, the reigning CMA Vocal Duo of the Year and ACM New Artist of the Year will join Jason Aldean’s NIGHT TRAIN Tour later this month. For tour dates and more, visit FloridaGeorgiaLine.com.