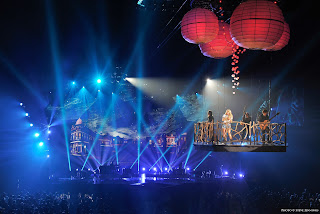 Nashville– (April 3, 2013) – Fresh from international stops across the Atlantic, six-time Grammy winner and ACM double-nominee Carrie Underwood’s “Blown Away Tour” has returned to play a string of sold-out arenas in North America to rave reviews. All 22 tour dates performed so far this year have been sell-outs, including Buffalo’s First Niagara Center, Hamilton, ON’s Copps Coliseum, Spokane’s Spokane Arena, and Fresno’s SaveMart Center, each with sold-out crowds of over 10,000 attendees. “The Blown Away Tour” broke records at the WFCU Centre in Windsor, ON, Canada as the fastest sell-out to date for the arena, as well as record-breaking attendance. The tour, which launched last June, has played across the United States, Canada, the U.K., Ireland, and Australia, and will perform a total of 111 dates in less than a year before wrapping on May 23 in Abbotsford, BC, Canada. After performing last night in St. John, NB, Canada Carrie will head to Los Angeles to debut the fourth single off her platinum-selling Blown Away album, “See You Again,” on American Idol, Thursday, April 4. On Sunday, April 7 Carrie will perform on the ACM Awards in Las Vegas, where she is nominated in the Female Vocalist of the Year and Album of the Year (Blown Away) categories. Carrie has produced three major arena concert tours in her career so far, 2008’s “Carnival Ride Tour,” 2010’s “Play On Tour” and 2012’s “Blown Away Tour,” each resulting in her being named the top-ranked country female touring artist of those years. In 2012, Carrie performed for over half a million fans on the first leg of the “Blown Away Tour.” A donation of $1 from each ticket sold on the North American leg of the “Blown Away Tour” continues in 2013 to support Red Cross disaster relief. Every year, the American Red Cross prepares for and responds to nearly 70,000 disasters across the United States. This donation will help the Red Cross provide shelter, food, and emotional support for those in need after a disaster. Proceeds from her Canadian concerts will be donated to the Canadian Red Cross. Since releasing her debut album in 2005, Carrie has sold over 15 million albums and placed 17 No. 1 singles on the charts. Her recent album, Blown Away, made history by debuting at No. 1 on Billboard’s Top Country Albums Chart, making Carrie only the second country artist in the 47-year history of the chart to have each of their first four albums debut at No. 1. The now platinum-selling Blown Away album also debuted at No. 1 on the all-genre Billboard 200 chart, making Carrie only the second country artist in history to have three consecutive albums debut at No. 1. She is a six-time Grammy winner, a two-time Academy of Country Music Entertainer of the Year, a three-time Country Music Association and ACM Female Vocalist winner, and a proud member of the Grand Ole Opry. Please visit www.carrieunderwood.fm for up to date information on the “Blown Away Tour.” Remaining 2013 dates on the “Blown Away Tour”: 4-9 Portland,ME Cumberland County Civic Center 4-11 Youngstown,OH Covelli Centre 4-13 Lansing, MI Breslin Student Events Center 4-14 Ft. Wayne, IN Allen County War Memorial Coliseum 4-16 Greenville, SC BiLo Center 4-17 Columbia, SC Colonial Life Arena 4-19 Augusta, GA James Brown Arena 4-20 Jacksonville, FL Jacksonville Veterans Memorial Arena 4-23 Houston, TX Toyota Center 4-25 San Antonio, TX Freeman Coliseum 4-27 Cedar Park, TX Cedar Park Center 4-29 Lafayette, LA Cajundome 5-1 Kansas City, MO Sprint Center 5-2 Bloomington, IL U.S. Cellular Coliseum 5-3 Milwaukee, WI BMO Harris Bradley Center 5-5 Toledo, OH Huntington Center 5-6 Springfield, IL Prairie Capital Convention Center 5-8 Charleston, WV Charleston Civic Center 5-10 Rockford, IL BMO Harris Bank Center 5-12 Omaha, NE CenturyLink Center 5-13 Sioux City, IA Tyson Events Center 5-15 Winnipeg, MB Canada MTS Centre 5-17 Moose Jaw, SK Canada Mosaic Place 5-18 Edmonton, AB Canada Rexall Place 5-20 Dawson Creek, BC Canada EnCana Events Center 5-21 Prince George, BC Canada CN Centre 5-23 Abbotsford, BC Canada Abottsford Entertainment & Sports Centre