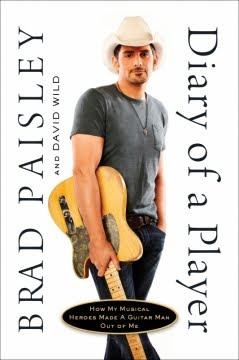 BRAD PAISLEY’S DIARY OF A PLAYER


NASHVILLE, Tenn. (Nov. 17, 2011) Country music superstar Brad Paisley has published his first major book titled DIARY OF A PLAYER with Howard Books, an imprint of Simon and Schuster. The book was released on Nov. 1 and has been on the New York Times Best-Seller list for two consecutive weeks.

The book is written as a thank-you and pays tribute to the guitar heroes that were and are in Paisley’s life. It is co-written with David Wild, a contributing editor to Rolling Stone and an Emmy nominated television writer and producer.