NASHVILLE, Tenn. -- October 27, 2011 - 2011 CMA New Artist of the Year nominee Chris Young recently showcased a piece of music history in a taped appearance at the Grand Ole Opry where he played a guitar once owned by the late Keith Whitley. Young, a fan of the iconic singer, acquired the Sigma by Martin - one of Whitley's three primary guitars - from Music City Pickers, a company that buys and sells vintage musical instruments. The company's founders, #1 hit singer/songwriter Brady Seals and former Gibson Guitars web editor Gabriel Hernandez, discovered the instrument on a buying trip to Lexington, Kentucky, in early August.

"Keith Whitley has always been one of my musical heroes, so to get the chance to hold a piece of history in my hands and play his guitar on the Opry stage was beyond awesome," shared Young.

Tune in to Great American Country ( GAC) "Opry Live" on Saturday, October 29 as Young performs his recent hits "You" and "Tomorrow" in addition to Whitley's "Don't Close Your Eyes," on the fabled guitar, airing at 9 pm ET on GAC. 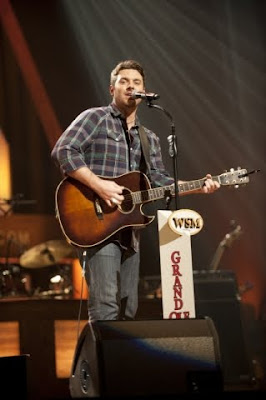 A BRIEF HISTORY OF THE GUITAR:
Throughout his highly successful but unexpectedly brief career, country music legend Keith Whitley played several different guitars. But during his remarkably historic run as mainstream country music’s top superstar from 1984 to 1989, Whitley performed primarily with just three guitars – a Martin acoustic, a Fender Telecaster, and a Sigma by Martin acoustic/electric he used live on numerous occasions throughout the final two years of his life.

The Martin acoustic and Fender Telecaster are both owned by private collectors and have been displayed on occasion at several museums throughout the southeast since Whitley’s death. The Sigma by Martin acoustic/electric, however, remained in the hands of a family friend and fellow musician, Earl Watkins – until now.

Watkins, who owned the famed Circle H Saloon just south of Lexington, Kentucky, until his retirement in 2007, met Whitley during the mid 1970s. They became close friends, playing bluegrass and country music together at the Circle H almost every weekend long into the early morning hours. Even after Whitley’s meteoric rise to fame and fortune in the 1980s, Whitley still made it a point to visit Watkins and the Circle H every time he passed through the area. It was during one of those visits in 1987 that Whitley asked Watkins about an old Fender Telecaster being played by one of Watkins’ band mates, Jerry Fannin. Whitley liked it so much he offered to trade his Sigma by Martin SE-36 acoustic/electric for the old Tele. Fannin agreed and the trade was made. Not long after that, Watkins purchased Whitley’s guitar from Fannin for $500. Watkins kept the guitar safely stored away until eventually giving it to his daughter Jeanne. During Music City Pick ers' recent event in Lexington, Jeanne received permission from her dad to sell the guitar, a deal was made and Music City Pickers became the new owners of this iconic instrument.

ABOUT MUSIC CITY PICKERS:
Based in Nashville, Tennessee, Music City Pickers is the creation of country music superstar Brady Seals (of Little Texas and Hot Apple Pie fame) and former Gibson® Guitars’ web editor Gabe Hernandez. The two met while researching the history of a guitar that Seals owned and became fast friends, bonding over their appreciation for vintage musical instruments. Seals and Hernandez are out to make Music City Pickers the world’s No. 1 trading destination for the buying and selling of fretted musical instruments specializing in vintage acoustic and electric guitars, basses, mandolins, resonators and banjos, but also including vintage electronic pianos and keyboards, old saxophones and trumpets, vintage European accordions and old harmonicas. They’ll provide fair pricing, vast expertise and an easy and safe environment in which to sell instruments.

ABOUT CHRIS YOUNG:
2011 has been an amazing year for Chris Young, with recent nominations including: CMA New Artist of the Year, three American Country Awards, and his first GRAMMY® nod, in addition to four national TV appearances. With his rich, warm baritone and penchant for writing relatable, slice-of-life songs, Young has emerged as both a critic and fan favorite. In the last few months, Young has celebrated GOLD selling status for both his sophomore album The Man I Want To Be, and smash single "Tomorrow" from the brand new album NEON. His latest single and follow up to four consecutive #1s, “You”, is screaming up the charts. Young has been out on the road most of this year on Jason Aldean’s “My Kinda Party Tour”. Miranda Lambert has selected Chris as her special guest for her tour “On Fire” starting in January 2012. For tour dates and all the latest information on C hris Young, visit www.chrisyoungcountry.com and follow him on Twitter @ChrisYoungMusic.