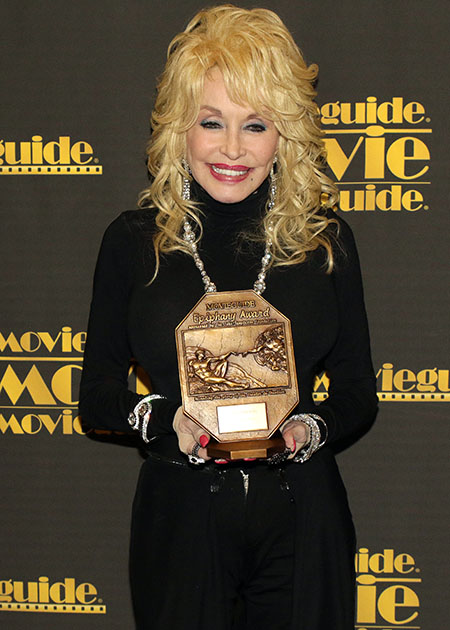 NASHVILLE, Tenn. (February 7, 2016) – The Movieguide® Awards honored international entertainment icon Dolly Parton with the Epiphany Prize for the Most Inspiring TV Program of 2015 for her NBC TV movie “Dolly Parton’s Coat of Many Colors.”

“I really wanted to celebrate the people, my whole family, who made me who and what I am today. I'm so blessed and thankful for a great cast, producers, director, and for everyone who watched and I’m extremely thankful to the Movieguide® Awards for this honor,” Parton said.

The presentation of the Epiphany Prizes for the Most Inspiring Movie and TV Program of 2015 is the highlight of the Awards, which also will be telecast Monday, Feb. 22, and Wednesday, Feb. 24 on the REELZChannel. The Epiphany Prizes are supported by a grant from the John Templeton Foundation (www.templeton.org). They are given every year to the “best, most inspiring movie and television program that resulted in a great increase in man’s love or understanding of God.”

Dolly Parton’s heartwarming film about following your dreams, having faith and keeping love alive despite tough times attracted 13 million viewers and was the most watched movie on broadcast TV in more than 3 years when it aired Dec. 10 on NBC.

The film is set in the Tennessee Great Smoky Mountains in 1955. It is neither a biopic nor musical about Parton’s whole life and performing career, but rather a family-oriented faith-based story about the incidents in her and her family’s life around the time she was 9 years old.

“Dolly Parton’s Coat of Many Colors” is the first in a planned series of TV movies inspired by the country music icon’s songs.

August 12, 2011
ARRESTED now in Colorado...but what a story and week for 2 brothers and their stripper sister! Text messages and tweets by three fugitive siblings who shot at a police officer and robbed a bank reveal a dangerous mindset and a firm bond between the siblings, "We've certainly seen their mindset when... They shot at a law enforcement officer outside of Tampa Bay, Fla., and when they fired inside that bank in Valdosta, Ga. But these additional texts and tweets have given us additional insight," FBI Special Agent Stephen Emmett told "Good Morning America" today. " We are concerned and feel that they are going to continue and cause problems to say the least for law enforcement." Ryan Dougherty, 21; his sister Lee Grace E. Dougherty, 29; and half-brother Dylan Dougherty Stanley, 26, have been on the lam since Aug. 2 when they shot at a police officer attempting to pull their white Subaru Impreza over for speeding. A few hours later, they robbed a bank in G
Post a Comment
Read more