The Band Perry at Belmont 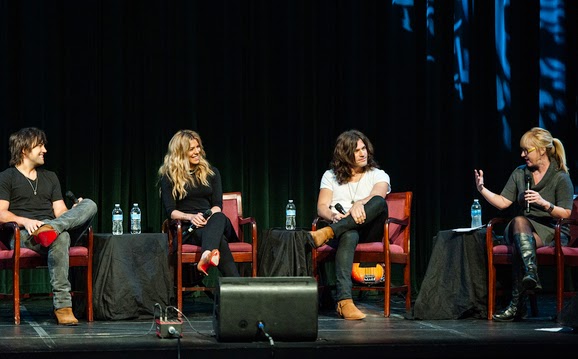 Nashville, TN (October 24, 2014) – 2014 CMA “Vocal Group of The Year” nominees, The Band Perry, took time out of their busy touring and recording schedule last week to give a Master Class at Belmont University’s School of Music in Nashville. With Massey Concert Hall as their backdrop, the sibling trio shared the backstory on how they started in the music industry, which included raising money for sound gear by selling homemade caramel apples door to door and traveling around the southeast to play shopping malls, campsites and restaurants. The band stressed the importance of perseverance, a strong support system, and accepting constructive criticism. They also mentioned the development of stage presence in addition to technical skills. The reigning ACM “Vocal Group of The Year” shared their strategy on how they grew “from a band to a brand,” encouraging students to find their own voice and focus on what they do best and what makes them unique. They also lent advice on coping with the rigors of breaking into the music business, a challenge very familiar to many of the young performers in the room. At the end of the hour, the band answered questions from the students, and then treated the audience to an impromptu acoustic performance of their quintessential hit, “If I Die Young.” "It was great to have Kimberly, Reid and Neil speak to our music students," said Dr. Cynthia Curtis, Dean of The College of Visual and Performing Arts. "Practical advice from professional musicians is an integral part of our students' education, and we could not have scripted this Master Class any better. The Band Perry offered our students real-life information about what the combination of talent and hard work can bring. Coming from an intelligent, accomplished and relatable act like The Band Perry, this advice was exactly what our students needed to hear as they begin to pursue their own professional careers." ABOUT THE BAND PERRY One of the most dynamic acts in music today, The Band Perry has achieved both massive mainstream success and major critical acclaim since delivering their platinum self-titled debut. Introducing the sibling trio as a powerful new force on the country scene, 2010’s The Band Perry offered up five hit singles, including the quintuple-platinum chart-topper “If I Die Young” and other platinum hits – the #1 “All Your Life” and “You Lie” – as well as “Hip to My Heart” and “Postcard from Paris.” For the band’s gold-certified second album Pioneer, frontwoman Kimberly Perry and her younger brothers Reid and Neil delved deeper into an edgy, rock-and-roll-inspired sound while staying true to their Southern roots. Featuring the platinum #1 single “Better Dig Two” and the gold #1 “DONE.” (plus smash hits “Don’t Let Me Be Lonely” and “Chainsaw”), Pioneer found The Band Perry widening their appeal and continuing to showcase their breathtaking three-part harmonies.