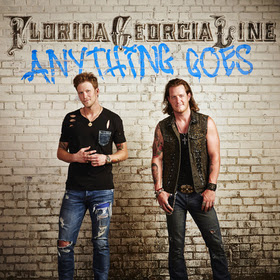 Nashville, TN - (October 22, 2014) – Florida Georgia Line is proving to be unstoppable with the release of their second album ANYTHING GOES (Republic Nashville). The highly anticipated project sold a monstrous 197,105 copies in its first week, earning the superstar duo their first debut at #1 on the all-genre Billboard 200 and Billboard Top Country Albums charts. Produced by Joey Moi, who was also at the helm of the 2X PLATINUM debut HERE’S TO THE GOOD TIMES, music critics nationwide are raving about FGL’s progressive sound along with the talented twosome’s impact on the genre and beyond: “…the sound of right now…" – COUNTRY WEEKLY "…you’ll want to crank it the sec­ond you leave the office." – US WEEKLY "…consistently inventive and engaging." – AP “Florida Georgia Line members promote a laid-back party lifestyle on stage and in their songs, but when the music stops, Hubbard and Kelley are more about loving strong, working hard and writing the next record-breaking country song.” – THE TENNESSEAN “…a hook-laden party album that's equal parts country and R&B, with rock guitars as occasional garnish.” – USA TODAY The buzz-worthy album features the PLATINUM-certified, #1 smash “Dirt” and sizzling new single “Sun Daze.” Currently on the road as direct support for Jason Aldean's BURN IT DOWN Tour, FGL will take their signature high-octane show worldwide on their headline ANYTHING GOES TOUR 2015. FGL has skyrocketed to stardom becoming the only artist in history to join Brooks & Dunn in achieving four back-to-back, multi-week #1 singles; breaking the record for longest #1 on Billboard’s Hot Country Songs chart and selling nearly 20 million tracks worldwide off their 2X PLATINUM debut HERE’S TO THE GOOD TIMES. In addition to collaborating across genres with sensations like Nelly and Jason Derulo, FGL has won numerous industry awards and recently was named one of the CMT Artists of the Year for the second time. The reigning CMA Vocal Duo of the Year will vie for the title again at the forthcoming awards on November 5, airing on ABC. FGL also scored an American Music Awards nomination for Favorite Band Duo or Group, Country and fans can vote now at http://ama.votenow.tv. FloridaGeorgiaLine.com