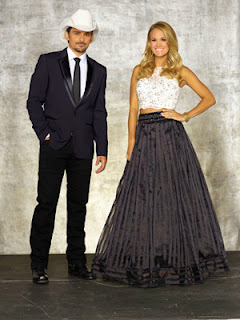 Seven-Time Hosts to appear on "The View" and "Late Night with Seth Meyers" in Advance of "The 48th Annual CMA Awards" Airing Live Nov. 5 on the ABC Television Network NASHVILLE – (October 24, 2014) - On Monday, Oct. 27, superstars Brad Paisley and Carrie Underwood, hosts of "The 48th Annual CMA Awards," will make appearances on "The View" and "Late Night with Seth Meyers" to promote Country Music's Biggest Night™, which airs live Wednesday, Nov. 5 (8:00-11:00 PM/ET) on the ABC Television Network. The duo, whose hosting skills have been praised year after year by fans and media, will bring their charm and comedic talents to both daytime and late night television audiences on Monday, Oct. 27. In the morning, they will visit with the cast of "The View" on the ABC Television Network (11:00 AM/ET) where Paisley will debut his current single "Perfect Storm" for the first time on national television and Underwood will discuss her upcoming album, Greatest Hits: Decade #1 in stores Dec. 9. "The View" is a live, one-hour daily talk show featuring moderators Whoopi Goldberg, Rosie O'Donnell, Rosie Perez, and Nicolle Wallace. That evening, Paisley and Underwood will join Seth Meyers on "Late Night with Seth Meyers." "Late Night with Seth Meyers" airs weeknights on NBC at 12:35 AM/ET. Both appearances will be in support of "The 48th Annual CMA Awards." While in New York they will also tape interviews with "Access Hollywood" and participate in a national satellite media tour with top ABC affiliates. Additionally, Paisley and Underwood will be hosting the nationally syndicated "Country Countdown USA with Lon Helton" airing the weekend of Nov 1-2. Last week it was announced that Lon Helton won the 2014 CMA National Broadcast Personality of the Year, marking the seventh time he has earned that honor.