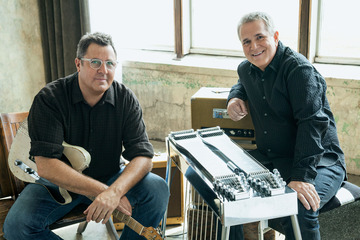 Album an Affectionate Salute to the Music of Buck Owens, Merle Haggard Road to Bakersfield Website Enables Fans to Picture and Post Themselves as Band Members Nashville, TN--July 30, 2013--With the release today of Vince Gill and Paul Franklin’s album Bakersfield, fans are transported to one of the most glorious periods in country music history. And to heighten their listening experience, an interactive website--http://www.roadtobakersfield.com/--has been specially designed to immerse fans personally in the sights and styles of those turbulent times. 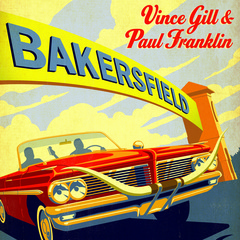 Bakersfield is Gill and steel-guitarist Franklin’s tribute to the early music of Buck Owens and Merle Haggard, both of whom fashioned their distinctive sounds while playing the clubs and honky tonks of Bakersfield, California. Unlike the more sedate sounds then spinning out of Nashville, West Coast country music tended to be raw, urgent, amplified and unfiltered. Gill, a 20-time Grammy winner and member of the Country Music Hall of Fame, and Franklin, a 13-times recipient of the Academy of Country Music’s steel guitar player of the year award, grew up riveted to Owens’ and Haggard’s music. Now playing together in the superband The Time Jumpers, the two old friends decided this was the ideal time to remind the world of what it’s been missing—not by recording a sound-alike salute but by re-animating the very heart of the music with their own affectionate and reverent interpretations. Bakersfield is a perfectly matched set of five Owens and five Haggard classics. Owens is represented by “Foolin’ Around,” “He Don’t Deserve You Anymore,” “Nobody’s Fool But Yours,” “But I Do” and “Together Again,” while Haggard stands forth via “Holding Things Together,” “I Can’t Be Myself,” “Branded Man,” “The Bottle Let Me Down” and “The Fightin’ Side Of Me.” These 10 songs were originally released between 1961 and 1974, the years during which America fought a divisive war in Vietnam, witnessed the triumph of the Civil Rights movement, suffered the assassinations of John F. Kennedy and Martin Luther King, soared to the moon, experienced the British invasion, the Summer of Love and Woodstock and was battered by the humiliation and resignation of a president. But in Bakersfield—if we are to believe its music—the biggest problem was heartache, and the greatest joy was falling in love. Owens and Haggard had both these bases covered. The RoadToBakersfield.com website is filled with features to draw fans into the Bakersfield milieu. One application allows them to upload their own photos and then outfit themselves either as members of Owens’ band, the Buckaroos, or Haggard’s band, the Strangers. These sartorial adornments include bow ties, hats and belts emblazoned “Buck” and “Hag,” as well as period instruments, amplifiers and microphones. The user can then share these “amended” photos across all the social networks. Here also are videos of Gill and Franklin discussing the making of Bakersfield, background material for the media and sales links (iTunes, Amazon, etc.) for purchasing the music. The site will be updated weekly with new features. In support of Bakersfield, Gill and Franklin, along with Gill’s top-notch band are scheduled to perform in these cities: August 8 Niagara Falls ON August 9 Malone, NY August 10 Cohasset, MA August 11 Westhampton Beach, NY August 22 Halifax, Nova Scotia August 23 -24 Moncton, New Brunswick August 25 Sydney, Nova Scotia August 27 Kingston, Ontario August 28 Syracuse, NY September 6 Springfield, OH September 7 Wisconsin Dells, WI September 8 Kansas City, MO September 28 Hillsdale, MI September 29 Louisville, KY October 10 Shippensburg, PA October 11 Windsor, Ontario October 12 Zanesville, OH October 20 Niceville, FL October 24 Mesa, AZ October 25 Bakersfield, CA October 26 Turlock, CA October 27 Carmel, CA October 29 Redding, CA October 30 Santa Rosa, CA November 1 Visalia, CA November 2 Palm Desert, CA November 3 Tucson, AZ For more info visit www.vincegill.com and www.roadtobakersfield.com