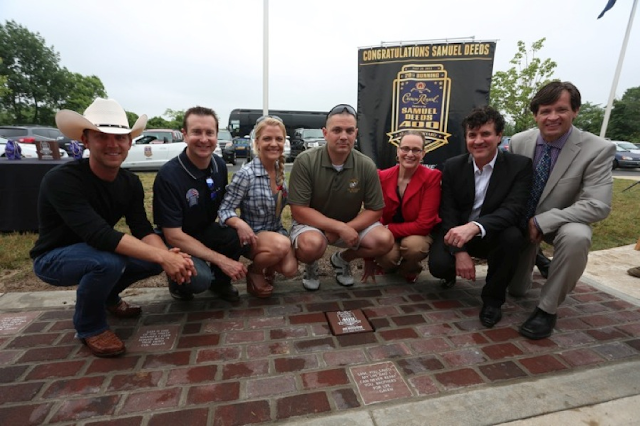 Country music singer Justin Moore, NASCAR driver Kurt Busch, Armed Forces Foundation President and Executive Director Patricia Driscoll , Crown Royal Brand Director Abby Wise, Big Machine Label Group Founder and CEO Scott Borchetta and Indianapolis Motor Speedway COO Doug Boles pose with Retired Gunnery Sergeant Samuel Deeds (center), winner of Crown Royal's "Your Hero's Name Here" program, behind the replica Yard of Bricks in Erlanger, Ky. on Thursday, June 27, 2013. As winner, Deeds will receive naming rights to the NASCAR Sprint Cup Series Race at Indianapolis Motor Speedway on July 28, 2013. NASHVILLE, TN (July 24, 2013) -- Big Machine Records and Crown Royal have released a new JUSTIN MOORE music video in advance of the Brickyard 400 NASCAR race this Sunday (7/28), where both companies are sponsors. The music video was created for “HEROES,” a special song performed by Justin and written by Greg Bates, both members of the Big Machine Label Group family. The video can be viewed here: http://www.youtube.com/watch?v=r1XqPaCD2dk&feature=youtu.be As previously announced, Justin surprised Gunnery Sgt. Samuel Deeds during an event in Erlanger, KY, where the US Marine was announced as the winner of the Crown Royal "Your Hero's Name Here." Each year a deserving individual is awarded naming rights to the July NASCAR Sprint Cup Series race at Indianapolis Motor Speedway as part of the program. Justin performed and recorded “Heroes” specifically for the Crown Royal Heroes Project. For a limited time only, fans 21 and over can download the song for free by visiting http://www.CrownHeroesSong.com. For every download redeemed between now and the Samuel Deeds 400 at the Brickyard® on July 28, 2013, Crown Royal will donate one dollar to the Armed Forces Foundation.