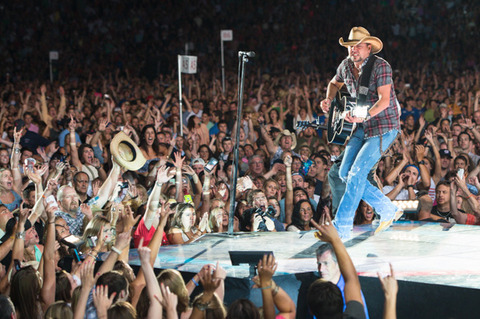 Nashville, TN – July 13, 2013 – MULTI–PLATINUM entertainer Jason Aldean notched two more venue attendance records this weekend at Fenway Park breaking Paul McCartney's single night record and The Dave Matthews Band's two night record previously set in 2006. Fans snatched up over 70,000 tickets in less than an hour and packed the ballpark as Aldean made history as the first country artist to play Fenway. "I heard we also set a new all time record for beer sales," laughed Aldean. "They drank Boston dry...it was wild!" The 2013 NIGHT TRAIN TOUR has sold out every show so far this year and continues next week at Wrigley Field in Chicago (7/20).