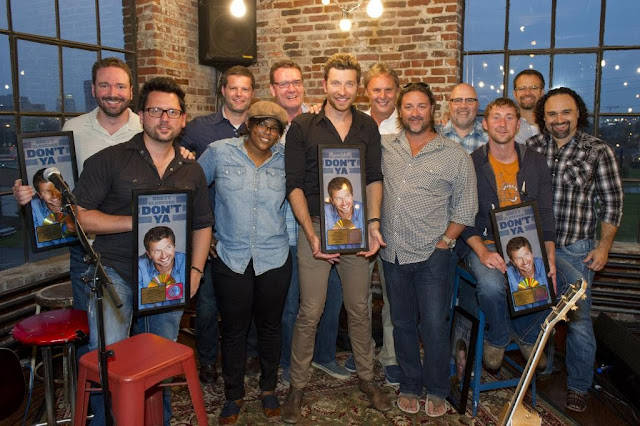 Nashville, TN – (July 31, 2013) – Powerhouse vocalist Brett Eldredge celebrated the forthcoming release of his debut album, Bring You Back, at a special Nashville event last night. The Atlantic Records’ artist was surprised with his first RIAA Gold single for his current hit “Don’t Ya” featured on the August 6 album release. With the single climbing to No. 4, Eldredge becomes the only artist so far this year to reach the Top 5 on Billboard’s Country Airplay chart for the first time. “To celebrate my debut album and my first Gold single with everyone that has stood by me on this ride was an amazing night and one that I will never forget,” said Eldredge. “I can’t believe it’s finally here! I wish I could personally deliver the album to each and every one of my fans.” Next week Eldredge will continue the celebration of his debut album with a headlining concert on August 6 at Highline Ballroom in New York City. The following day, he will make his late night TV debut on “Late Night with Jimmy Fallon” followed by appearances on “Live with Kelly & Michael” and “Today” on August 9. The past few months have seen the “Don’t Ya” singer opening for Taylor Swift on 19 dates of “The RED Tour” and appearing on the LP Field and Riverfront stages during CMA Fest 2013 in Nashville. This summer Eldredge can be seen throughout the country at various fairs and festivals in addition to select tour dates with Dierks Bentley and Miranda Lambert. Chicago Sun Times recently described the Illinois native’s impressive vocals as “exud[ing] a magical combination of innocence and heartiness” and Billboard noted “there is a touch of gravel in Eldredge’s voice which he presents with a commanding, soulful delivery.” In addition, Warner Music Nashville President & CEO John Esposito raves, “Brett is a force of nature that one is lucky enough to bump into once in a lifetime. His powerful yet intimate voice stopped me in my tracks.” For further information and a list of complete tour dates please visit: www.bretteldredge.com. ###