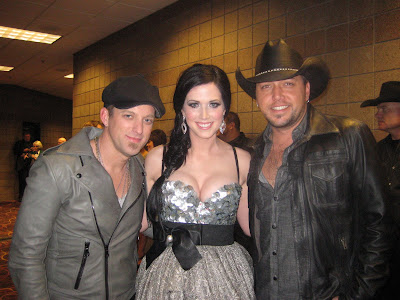 With a roster of talented artists that now include Jason Aldean, Kristy Lee Cook, James Wesley, Blake Wise and Dustin Lynch, Broken Bow Records continues to make a name for itself in the Country music industry. The success of multi-platinum selling and Grammy nominated BBR artist Jason Aldean in particular has launched the label to the top of the charts. Jason Aldean began his success at the label in 2005, when his self-titled debut album ("Hicktown" "Why" "Amarillo Sky") was certified Gold in 12 weeks and shortly thereafter was certified Platinum. In rapid succession, another Gold and Platinum album followed giving birth to the hit singles, “Johnny Cash,” “She’s Country,” “Big Green Tractor,” “The Truth” and “Crazy Town.” “Big Green Tractor” was also a #1 ringtone in all genres- the first Country ringtone to hold that distinction. Aldean, whose Double Platinum #1 album MY KINDA PARTY is the top-selling Country album of 2011, earned three 2011 CMA Awards including Album of the Year.   www.brokenbowrecords.com

Stoney Creek Records was founded in March of 2009 by CEO/President Benny Brown as a continuation of the passion and determination that spawned the success of sister imprint, Broken Bow Records. The current artist roster includes Thompson Square, Randy Houser, Parmalee, Ash Bowers and Crossin’ Dixon. Thompson Square’s Grammy nominated #1 single, “Are You Gonna Kiss Me Or Not” is the Most Played Song on Country Radio in 2011 (Mediabase) and has sold 1.5 million downloads to-date. Thompson Square’s breakout year also garnered the husband/wife duo three 2011 American Country Awards, two CMA Award nominations for Best New Artist and Duo of the Year, an American Music Award Nomination for New Artist of the year and two CMT Music Award nominations.  Both Broken Bow and Stoney Creek Records are headquartered in Nashville, TN and are distributed by Sony RED.      www.stoneycreekrecords.com