THE MAVERICKS RELEASE DATE FOR IN TIME MOVES TO FEBRUARY 26TH 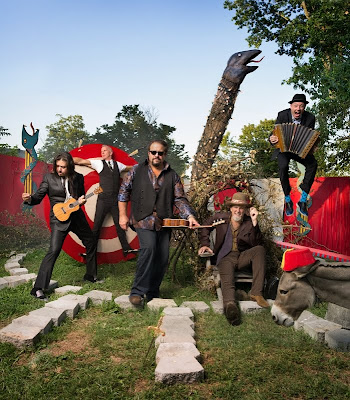 Nashville, TN – Grammy-winning group, THE MAVERICKS, move the release of In Time, their first album in seven years, to February 26, 2013. Currently sailing the high seas on the Sandy Beaches cruise the band will return to Nashville for a performance on The Grand Ole Opry on January 19th before heading across the pond for a sold out show at the Royal Concert Hall in Glasgow, Scotland on January 22nd. With their new album, time melts once again and the band that defied definitions, blurred genres and made everybody feel good, is back. Whether it’s the Buck Owens-influenced “Dance In The Moonlight,” the panoramic Orbison-esque “Born To Be Blue,” the horn-punctuated retro noir “Back In Your Arms Again” or Tejano-esque “All Over Again,” the Mavericks have once again found the way to make soul music and sole music. For Malo, the lead singer with the rich supple voice that’s second to only Roy Orbison in its ability to convey lonesome, desire and vivre; drummer Paul Deakin and multi-instrumentalist Robert Reynolds; as well as longtime collaborator keyboardist Jerry Dale McFadden and seasoned guitarist Eddie Perez, life has made them richer in terms of experience, playing acumen and a sense of their own musicality. It has also deepened the connection between them in a way that heightens the singular chemistry that made the Grammy-winning band one of the most exciting live propositions in any musical genre. The tour will kick off in NYC on February 25th at the Bowery Ballroom. More tour dates will be announced next week. Tour dates: January 19 Grand Old Opry Nashville, TN January 22 Royal Concert Hall Glasgow, Scotland (SOLD OUT) February 25 Bowery Ballroom New York, NY