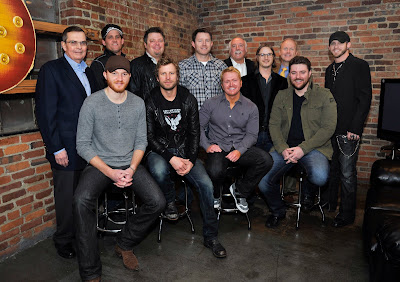 During the Luncheon, CMA Chairman Troy Tomlinson Announces $250,000 CMA Foundation Donation to Help Construct the Nashville Songwriters Hall of Fame at the new Music City Center NASHVILLE – Third time’s the charm at the annual CMA Songwriters Luncheon with the presentation of the CMA Triple Play Awards, which honor songwriters who pen three chart-topping hits in a 12-month period. During the event held today at Marathon Music Works in Nashville, a dozen songwriters received the three-peat trophy from CMA Board Chairman Troy Tomlinson, President and CEO, Sony/ATV Music Publishing Nashville. “People from all over the world recognize that Nashville is not only Music City, but the epicenter of the songwriting community,” said Tomlinson. “CMA celebrates this important membership group. The presentation of the Triple Play Awards is just another example of CMA’s commitment to honoring the creators of song.” “Nashville is legendary for its songwriters and CMA is proud to recognize this important segment of our industry,” said Steve Moore, CMA Chief Executive Officer. “It is an honor to present these songwriters and songwriting artists with the Triple Play Award and acknowledge this incredible accomplishment and their significant contributions to our format.” Attending today’s luncheon were Dierks Bentley, Rodney Clawson, Brantley Gilbert, Ben Hayslip, Josh Kear, Shane McAnally, Eric Paslay, Neil Thrasher, and Chris Young. Also in attendance were hit tunesmiths from ASCAP, BMI, and SESAC, as well as songwriter members of CMA and representatives of some of the most successful publishers in Music City. Recognizing excellence is central to CMA’s mission and the Association recognizes songwriters throughout the year with the CMA Award for Song of the Year, which is presented on the annual broadcast to the winning songwriters, and the creation of a rotating category for songwriters in the coveted Country Music Hall of Fame. In addition, the CMA Board of Directors created and launched the CMA Songwriter Series in 2005 at Joe’s Pub in New York City, which has grown to include shows in Boston, Chicago, Los Angeles, Phoenix, and Washington D.C. In 2012, the series expanded to the U.K. and Ireland and will be going back for a second time in February. On March 1, the Songwriter Series will take place in Paris for the first time as part of the CMA International Marketing Summit. In alphabetical order, the recipients of CMA’s Triple Play Award: Dierks Bentley: “Am I The Only One,” “Home,” “5-1-5-0” Rodney Clawson: “Drink On It,” “Drunk On You,” “Take A Little Ride” Eric Church: “Drink In My Hand,” “Springsteen,” “Creepin’” Brantley Gilbert: “Dirt Road Anthem,” “Country Must Be Country Wide” “You Don’t Know Her Like I Do” Ben Hayslip: “Honey Bee,” “I Don’t Want This Night To End,” “I’m Gonna Love You Through It” Dave Haywood: “Just A Kiss,” “We Owned The Night,” “Dancin’ Away With My Heart” Josh Kear: “Dancin’ Away With My Heart,” “Drunk On You,” “Blown Away” Charles Kelley: “Just A Kiss,” “We Owned The Night.” “Dancin’ Away With My Heart” Shane McAnally: “Alone With You,” “Come Over,” “Kiss Tomorrow Goodbye” Eric Paslay: “Barefoot Blue Jean Night,” “Even If It Breaks Your Heart,” “Angel Eyes” Neil Thrasher: “Tattoos On This Town,” “Banjo,” “Fly Over States” Chris Young: “Voices,” “Tomorrow,” “You” “I'm so grateful to be a part of the Nashville family,” said Paslay. “One of my biggest dreams was to have a song on Country radio. Getting a No. 1 was sugar on top. Being honored by the CMA with a Triple Play Award has made 2012 the sweetest year of my life so far!” “Considering my love for Country Music and my lifelong dream to have songs on the radio, I am blown away by the idea that I would have a No. 1 at all, much less three in one year,” said McAnally. During the luncheon, Tomlinson also presented a $250,000 donation from the CMA Foundation to the Nashville Songwriters Hall of Fame Foundation to help construct the Nashville Songwriters Hall of Fame at the new Music City Center and “Songwriters Square,” an exterior plaza and walkway leading into the state-of-the-art Center, which will be engraved with the names of Songwriters Hall of Fame members and the titles of their most beloved compositions.