100 Times at Opry for Carrie Underwood 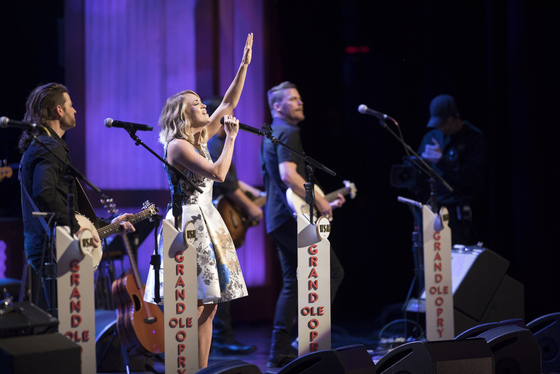 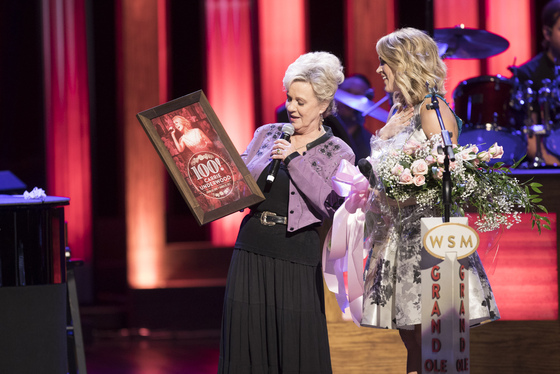 Nashville, TN, - (March 25, 2017) - Seven-time GRAMMY® Award winner and ACM Entertainer of the Year nominee Carrie Underwood celebrated her 100th performance on the Grand Ole Opry this weekend with four sold-out shows. Underwood made her Opry debut on June 10, 2005, less than two weeks after winning American Idol, and became an official Opry member in 2008. Her love for the Opry started as a child, as she grew up watching and listening to the show, dreaming of one day performing there and even becoming a member herself.
Opry and Country Music Hall of Fame member Connie Smith introduced Underwood on Saturday’s first show and presented her fellow Opry member with a commemorative print and a rose bouquet in celebration of 100 Opry appearances. “Opry fans, all of us Opry members, and the entire Opry family are excited when you come home to the Opry stage,” Smith said to Underwood. “Even when you’ve been on the road more than 200 days a year, you’ve always come back to the Opry. That tells me you love us, and we love you right back.”
“I grew up dreaming of one day performing here and maybe even becoming a member. That dream comes true over and over each time I take the Opry stage,” Underwood said. “Here’s to the next 100!”
Backstage, Underwood marked the 100-show milestone with a specially-decorated cake from Nashville’s IveyCake and 100 pink roses in her dressing room, a surprise gift from the Opry.
Next week, Carrie heads to Las Vegas to perform on the “52nd Academy of Country Music Awards” on Sunday, April 2 on CBS where she is up for two awards including Entertainer of the Year and Female Vocalist of the Year. Carrie has a career win of 12 ACM Awards including being the first female artist to be twice named the Academy of Country Music’s Entertainer of the Year and the Triple Crown Award.