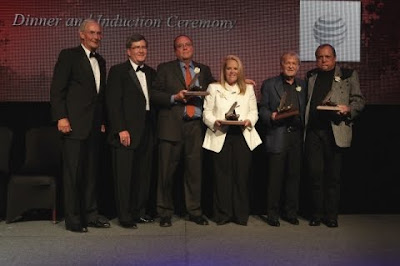 Nashville, TN October 8, 2012 -- Country artist and songwriter Mary Chapin Carpenter and songwriters Tony Arata, Larry Henley and Kim Williams were inducted into the Nashville Songwriters Hall Fame during the organization's 42nd Anniversary Hall of Fame Dinner & Induction Ceremony, held last night at the Renaissance Nashville Hotel. Presented by AT&T, the event celebrated the musical contributions of the newest inductees through star-studded performances of some of their biggest hits. “It was an evening worthy of these great songwriters and the contributions they have made to put the music in Music City,” said John Van Mol, Chairman of the Nashville Songwriters Hall of Fame Foundation. “The evening also capped a week of major news for the Nashville Songwriters Hall of Fame. We announced last week that the Hall of Fame will soon have a physical home in the brand new Music City Center, where people will be able to see, hear and learn about the contributions and work of Nashville’s best songwriters.” Van Mol added that the Songwriters Hall of Fame will open when the new Music City Center opens in the spring of 2013 and that Sunday’s inductees will be a part of the new exhibit along with the 184 celebrated songwriters who preceded them into the Hall of Fame. Additionally, Van Mol announced the official launch of a capital campaign to ensure the continued funding of the exhibit. Early contributions from Foundation Board members, ASCAP, BMI, SESAC and music publishers Sony/ATV, Universal and Warner Chappell, among other music industry leaders, have already laid the groundwork for construction to begin at the Music City Center. More support is being solicited from donors both inside and outside the music industry to assure the exhibit’s completion and long-term success. Larry Henley was the first of this year’s inductees to be honored and was inducted by Richard Leigh, another Hall of Fame member. Bekka Bramlett and Billy Burnette performed a medley of the Henley songs “Til I Get It Right,” “Is It Still Over,” “Lizzie And The Rainman” and “He's A Heartache.” Country artist Trisha Yearwood closed out the set with "The Wind Beneath My Wings." Superstar Garth Brooks then took the stage to welcome his friend and co-writer Kim Williams into the elite organization. In a one man tour de force, Brooks performed a medley of Williams’ songs that included “Papa Loved Mama,” “New Way To Fly” and “Three Wooden Crosses." Brooks was himself inducted into the Hall of Fame last year. Next up, hit recording artist and songwriter Mary Chapin Carpenter was inducted by Hall of Fame songwriter Don Schlitz. Marc Cohn took the stage to perform “The Hard Way” and was followed by Yearwood, who sang “He Thinks He’ll Keep Her.” The final inductee of the evening was Tony Arata, who was welcomed by Hall of Fame songwriter Pat Alger. Songwriter friends Fred Knobloch, Jelly Roll Johnson and Pete Wasner performed a medley of the Arata compositions “Here I Am,” "Holding My Own” "The Change” and "I Used To Worry." Garth Brooks took the stage once more and closed the evening with “The Dance." In a special tribute alongside the hall of fame inductions, Kix Brooks, Don Cook and Paul Worley announced that the 2012 recipient of the Frances Williams Preston Mentor Award was the late Donna Hilley, former president and chief executive officer of Sony/ATV Nashville. Accepting on behalf of Ms. Hilley were her daughters Vickie Arney, Debbie Tenpenny and Whitney Stewart. In addition to the Nashville Songwriters Hall of Fame inductions, NaSHOF's sister organization, the Nashville Songwriters Association International (NSAI), presented its annual Songwriter Achievement Awards. The organization's professional songwriter members voted "I Will Always Love You" by Dolly Parton as their Song of the Year. The song was a mainstay at radio this year following the untimely death of superstar Whitney Houston in February. The Songwriter/Artist of the Year was presented for the fifth time in six years to Taylor Swift, who scored self-penned hits of her own, such as “Sparks Fly,” “Ours,” “If This Was A Movie,” “The Story Of Us,” “Superman,” “Safe And Sound” and “Eyes Open.” The Songwriter of the Year prize went to Dallas Davidson, co-writer of hits such as “We Owned The Night” and “Just A Kiss” by Lady Antebellum, “I Don't Want This Night To End” and “Country Girl (Shake It For Me)” by Luke Bryan, “If Heaven Wasn't So Far Away” by Justin Moore, “Where I Come From” by Montgomery Gentry, “This Ole Boy” by Craig Morgan, “Take It Off” by Joe Nichols and “A Buncha Girls” by Frankie Ballard. Besides honoring the Song, Songwriter and Songwriter/Artist, the writers of NSAI's Professional Songwriters Division also singled out 10 songs and their writers for the organization's 2012 awards, informally dubbed "The Songs I Wish I'd Written." Recipients were: “A Woman Like You” (Phil Barton, Johnny Bulford, Jon Stone / recorded by Lee Brice), “Better Than I Used To Be” (Ashley Gorley, Bryan Simpson / recorded by Tim McGraw), “Cost Of Livin'” (Phillip Coleman, Ronnie Dunn / recorded by Ronnie Dunn), “Even If It Breaks Your Heart” (Will Hoge, Eric Paslay / recorded by the Eli Young Band), “Fly Over States” (Michael Dulaney, Neil Thrasher / recorded by Jason Aldean), “I Will Always Love You” (Dolly Parton / recorded by Whitney Houston), “Just Fishin'” (Casey Beathard, Monty Criswell, Ed Hill / recorded by Trace Adkins), “Red Solo Cup” (Brett Beavers, Jim Beavers, Brad Warren, Brett Warren / recorded by Toby Keith), “Springsteen” (Eric Church, Jeff Hyde, Ryan Tyndell / recorded by Eric Church) and “You And Tequila” (Matraca Berg, Deana Carter / recorded by Kenny Chesney w/ Grace Potter).