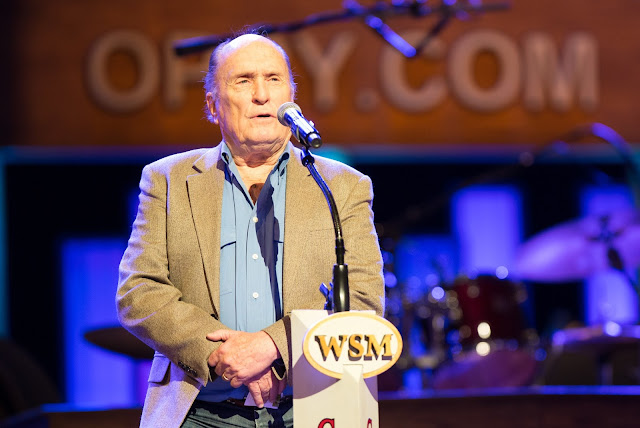 "It's an honor to be here," Thornton said during The Boxmasters set. "Thanks for coming out."

After his guest announcer stint in which he reflected on his work in films such as To Kill A Mockingbird and Lonesome Dove as well as sharing stories about country legends including Johnny Cash and Carl Smith, Duvall walked center stage to perform.  "Thank you so much for having me," he said.

During his set which landed between the Academy Awards winners' performances, hit-maker Rhett quipped, "They don't tell you in 6th grade that you are gonna play the Opry between Billy Bob and Robert Duvall.  This is crazy!"

Past Opry performers have included Academy Award winners Sissy Spacek, who played the Opry while preparing for her role as Opry legend Loretta Lynn in Coal Miner’s Daughter, and Kevin Costner, who has played the Opry three times with his band Modern West. Other guest performers and guest announcers have included Kevin Bacon, Jack Black, Lester Holt, Robin Roberts, and Bob Schieffer, to name a few.

Duvall has been nominated for seven Academy Awards (awarded for his performance in Tender Mercies), seven Golden Globes (winning four), and has multiple nominations and one win each of the BAFTA, Screen Actors Guild Award, and Emmy Award. In 2005 he received the National Medal of Arts. His films and television series are some of the most popular of all time including The Twilight Zone, The Outer Limits, To Kill a Mockingbird, THX 1138, Colors, Joe Kidd, The Godfather, The Godfather Part II, MASH, Network, The Apostle, True Grit, The Conversation, Apocalypse Now, Falling Down, Tender Mercies, The Handmaid's Tale, The Natural, Lonesome Dove, and Get Low.
The Boxmasters formed in 2007 and released its self-titled debut record to critical acclaim.  The band has enjoyed success on the Americana radio and albums charts, and its Opry stop is part of a summer tour.