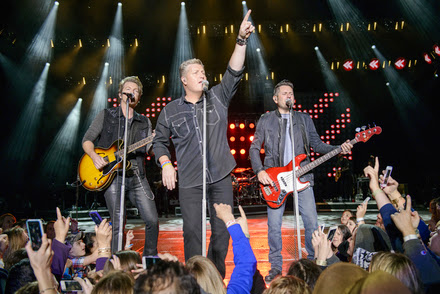 COUNTRY MUSIC SUPERGROUP RASCAL FLATTS ANNOUNCE RIOT TOUR 2015 Trio Brings Along Special Guest Scotty McCreery For Multi-City Tour - Tickets On Sale 1/26 Nashville, TN - Jan. 20, 2015 – Multi-Platinum selling group Rascal Flatts revealed plans today for their headlining RIOT TOUR 2015. The coast-to-coast tour will kick off May 29 in St. Louis, MO and will continue throughout the summer with special guest Scotty McCreery. Tickets will be available for fans to purchase beginning Jan. 26 for select cities as part of tour promoter Live Nation's Country Megaticket at www.Megaticket.com and additional information will be available in the coming weeks at www.rascalflatts.com. Before their headlining tour kicks off this summer, Rascal Flatts will start the first-ever country residency at The Joint at Hard Rock Hotel & Casino in Las Vegas, from Feb. 25 to March 14 with The Voice winner Craig Wayne Boyd tapped for the opening slot. Tickets for Rascal Flatts Vegas Riot! are on sale now. "2014 was such a great year for us on the radio and on tour," said Jay DeMarcus. "We had a few weeks off at the holidays, and now we're getting ready for the first-ever country residency at The Joint at the Hard Rock in Vegas. Those shows are going to be the ultimate way to kick off our 2015 tour, where we can try new things and pretty much do whatever the hell we want. We're having a blast with it, and we'll be counting the days til the buses pull back out of Nashville for opening night." With countless sold-out shows under their belts, Rascal Flatts' live show has been heralded as keeping "crowds on their feet, dancing and especially singing along," (Cleveland Plain Dealer), "brilliant" (Dallas Morning News) and "high energy" (St. Louis Post Dispatch). Their current Big Machine Records single "Riot," from which the tour name is lifted, is impacting radio now. RIOT TOUR 2015 Cities: Cozumel, MX* Atlanta, GA* Forest City, IA* St. Louis, MO Indianapolis, IN Hershey, PA Virginia Beach, VA Washington, DC Hartford, CT Columbus, OH* Cadott, WI* Dallas, TX Pittsburgh, PA Charlotte, NC Raleigh, NC Holmdel, NJ Philadelphia, PA Boston, MA Detroit, MI* Brownsville, OR* Toronto, ON Cleveland, OH Darien Center, NY Jones Beach, NY Cincinnati, OH Chicago, IL Albuquerque, NM Phoenix, AZ Irvine, CA Mtn. View, CA W. Palm Beach, FL Tampa, FL *Denotes Festival Rascal Flatts (Gary LeVox, Jay DeMarcus and Joe Don Rooney) have earned over 40 trophies from the ACMs, AMAs, CMAs, People's Choice Awards and more making them the most awarded country group of the past decade. To date, the trio has scored 15 No. one songs, sold over 22.8 million albums, over 29 million digital downloads, and their current ninth studio album REWIND (Big Machine Records) debuted at No.one on the Billboard Country Albums chart making them one of only four acts during the SoundScan era to have eight consecutive studio albums debut in the top spot. For more information, visit www.rascalflatts.com. Scotty McCreery has sold more than 2.1 million albums since winning “American Idol” in 2011: his first album Clear as Day debuted at No. one on the Billboard 200 Albums chart, and his sophomore album See You Tonight debuted at No. one on the Billboard Top Country Albums Chart and featured his two consecutive Top 10 hits - “Feelin’ It” and the title track. The ACM, CMT, ACA, and ICM Award winner recently earned three Platinum-certified singles in the same week. For more information, visit ScottyMcCreery.com.