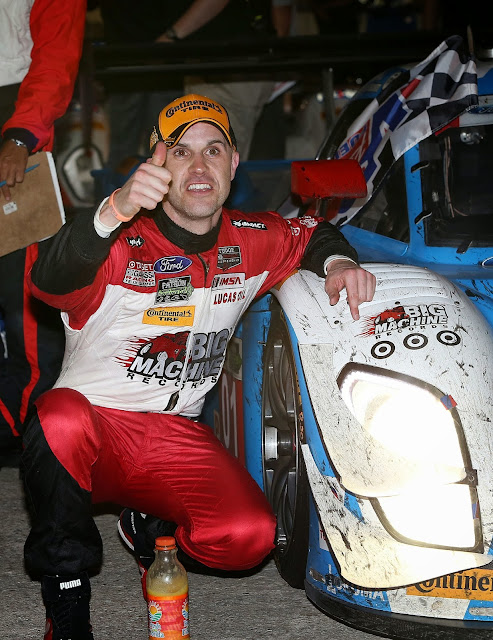 Marino Franchitti celebrates the win with a nod to sponsor Big Machine Records. 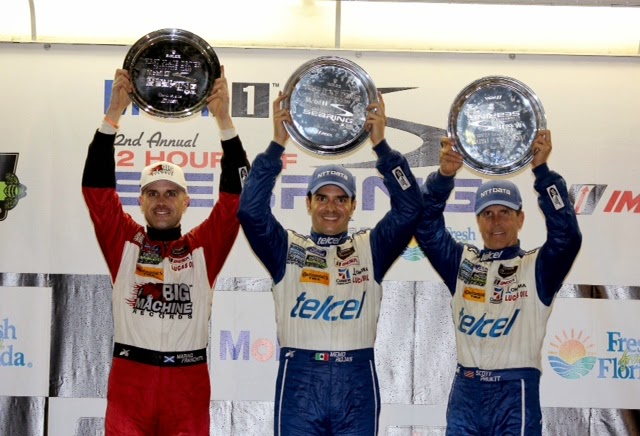 Nashville, TN (March 17, 2014) – Speeding into Victory Lane with the closest-finish in race history (4.682 seconds with Marnio Franchitti at the helm), Big Machine Records added more hardware to its shelf at the TUDOR United SportsCar Championship’s 62nd Annual Mobil 1 Twelve Hours of Sebring Fueled by “Fresh from Florida.” The label’s longstanding partnership with Chip Ganassi Racing with Felix Sabates fostered an impressive set of wins over the weekend. Marking the inaugural attempt in the Chip Ganassi Racing Teams' 25-year history, the No.1 Telcel Ford EcoBoost Riley car, driven by Marino Franchitti, Scott Pruett and Memo Rojas, claimed the first place title. The No. 02 Comfort Revolution/Big Machine Records Ford EcoBoost Riley, driven by Scott Dixon, Sage Karam and Tony Kanaan, came in sixth place overall and reigned supreme with the most points from the Sebring’s three segments toward the season-ending $100,000 bonus for the Patrón Endurance Cup for the Prototype (P) class. Select drivers were outfitted with the bold BMR logo while both cars prominently featured the image. “It hasn't really sunk in yet what we've done, but every time I remember it makes me smile! We couldn't have done it without Big Machine, they are more than a partner, they are like family and to see them win another one of the worlds biggest races is fantastic. Scott Borchetta has been in victory lane at the Indy 500 and I know how much it means to him that we were able to get Big Machine into the same spot at Sebring,” said Franchitti.