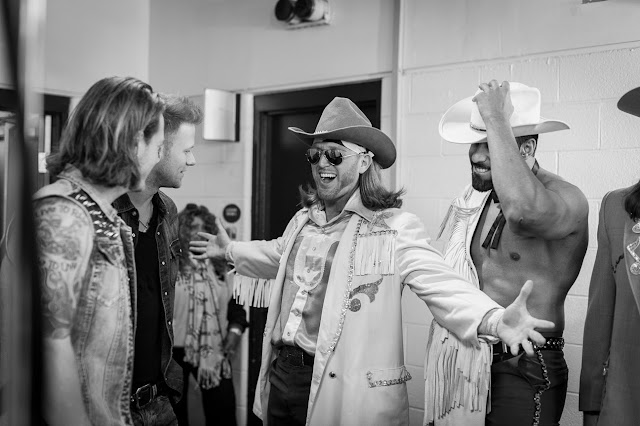 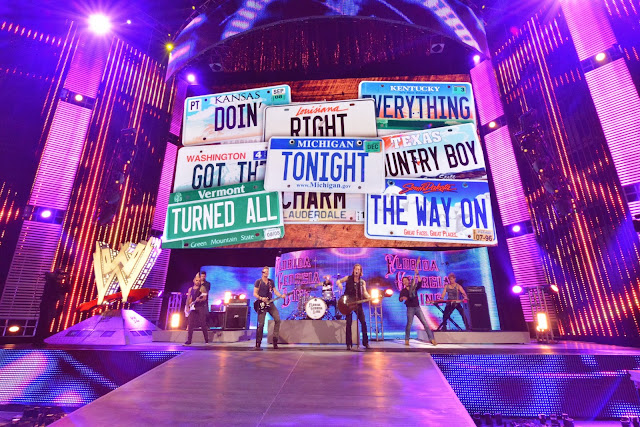 Courtesy of WWE Nashville, TN (November 19, 2013) – As their GOLD-certified, multi-week #1 smash “Round Here” suggests, Florida Georgia Line had the “country boy charm turned all the way up” last night (11/18) during WWE’s Monday Night RAW at Nashville’s Bridgestone Arena. With pyro blazing and customized graphics flashing lyrics, the breakthrough duo knocked out a high-energy performance of the hit, which was used as the show’s official theme song for the special edition of “Raw Country.” Watch here. FGL’s Brian Kelley (Ormond Beach, Florida) and Tyler Hubbard (Monroe, Georgia) also got in on the action backstage with segments featuring WWE Superstars John Cena, 3MB and Zack Ryder. While the WWE Divas used FGL’s 6X PLATINUM debut hit “Cruise” for a round of “musical chairs.” Monday Night Raw is the longest-running, weekly episodic program in U.S. primetime TV history and is the most-watched, regularly scheduled, year-round program on cable, airing live every Monday night on the USA Network at 8/7C. ABOUT FLORIDA GEORGIA LINE: Florida Georgia Line has skyrocketed since releasing consecutive, multi-week #1 smashes in the US and Canada with the GOLD-certified “Round Here,” PLATINUM-certified “Get Your Shine On” and 6X PLATINUM “Cruise.” Breaking the record for longest #1 on Billboard’s Hot Country Songs Chart, “Cruise” has sold over 6.1 million downloads in the US alone and is the second best-selling Country single ever, according to SoundScan. FGL is the only artist in history to join Brooks & Dunn in having their first three singles hit #1 for multiple weeks each. Poised to follow in the success, FGL’s new emotionally-fueled Top 15-and-rising single, “Stay,” showcases another side of their unique sound and tight harmonies. Amassing international appeal, the duo recently crossed a new career threshold -- tallying more than 10 million tracks sold worldwide from their debut album HERE’S TO THE GOOD TIMES (Republic Nashville), which has been certified PLATINUM in the US and GOLD in Canada. On 11/25, FGL will release HERE’S TO THE GOOD TIMES…THIS IS HOW WE ROLL, a deluxe version of their chart-topping debut, that will feature five new songs – including a collaboration with Luke Bryan – the “Cruise” (Remix) featuring Nelly; the making of the album and all official music videos with behind-the-scenes footage, as well as the unreleased video for “It’z Just What We Do.” Comprised of Tyler Hubbard (Monroe, Georgia) and Brian Kelley (Ormond Beach, Florida), FGL is currently on their first headline run, HERE’S TO THE GOOD TIMES TOUR 2013, breaking venue sales records nationwide with sold-out shows on all stops to date. FGL has performed on Conan, TODAY, The Voice, The Tonight with Jay Leno, Late Night with Jimmy Fallon, LIVE with Kelly & Michael, Jimmy Kimmel Live! and FOX & Friends, in addition to a presenter spot on the 2013 Billboard Music Awards. In addition to radio, sales and touring success, the talented twosome has been racking up several awards’ show nominations, including nods in the New Artist of the Year category. FGL is currently nominated for seven fan-voted American Country Awards and four fan-voted American Music Awards in the coming months. The hot newcomers have previously taken home CMA, ACM and CMT Music Awards and garnered multiple TEEN CHOICE nominations.